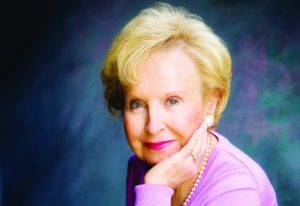 Interment followed at Emanuel Cemetery. Feldman Mortuary made the arrangements.

Family members, grandchildren and friends eulogized this extraordinary woman at the filled-to-capacity service in words, songs and memories.

“Warren was the perfect ‘I am here.’”

Mrs. Toltz could have been speaking about herself, for she willingly accepted, tackled and helped solve all the challenges in her path.

“Her wish for her family and community was to honor her legacy by being good people, doing
good deeds, never ceasing to look for ways to help the less fortunate, valuing inclusivity and treating one another with love and respect,” her family said.

She modeled her commitment to tikkun olam, healing the world, on lessons learned from her grandparents, parents and her husband Warren and watching how they lived their lives.

Mrs. Toltz wrote a moving handwritten ethical will for her children that epitomizes her love of Judaism, selfless philosophy and hopes that they would take their place as community leaders.

“My wish is for all of you is to study Torah,” she wrote. “I have found so much benefit in taking classes about Judaism. It has enriched my life. There are wonderful adult classes all over the city and you can study with so many different teachers.”

She wanted her children to emulate her values: “To be good people — honest people — to always look to help the less fortunate . . . To honor my name and theirs by doing good deeds.

“I want you all to be leaders in your life and role models for your children and grandchildren . . . ”

But it was her dedication to deeds of lovingkindness that made her shine the brightest.

Jewish, cultural and educational organizations thrived under her gifted, generous leadership, which raised funds that filled gaps across Colorado and attracted new members.

For others it was the way she singled out each person in a crowded room, as if she intuited the very words they wanted to hear.

Her smile alone resonates in so many hearts, even now.

Ruth Yvette Toltz was born April 12, 1933 in Denver to Esther and Jack Bugdanowitz, the founders of Dependable Cleaners and role models that shaped her own future.

“She credited her drive and passion for life and Judaism to her childhood upbringing,” the family said.

Her grandfather, Sam Weisbart, emigrated from Europe before the Holocaust and earned enough money to send for his wife and her two brothers.

“As a child, Ruth overheard relatives whispering about those family members who were unable to leave Poland. All of them perished.”

This established her lasting connection to Holocaust victims and survivors.

She met Warren Toltz when he and a friend crashed a party she threw for her college roommates in August, 1951.

When Mr. Toltz went to Clovis, NM, with the Air National Guard, he would hop a plane to see her and she visited him in December.

They became engaged on Feb. 1, 1952 and were married on April 6 that same year at BMH. He belonged to the Hebrew Educational Alliance and she was a member of Temple Emanuel.

“BMH was neutral territory,” she said.

The couple made a dynamic team. When the community called, they answered.

Mrs. Toltz served on the board of directors for the Allied Jewish Federation (now JEWISHcolorado), Dependable Cleaners, Beth Israel Hospital, the Council on Jewish Aging and CAJE.

She was honored with the federation’s Golda Meir Award in 1988.

“She exemplified the powerful role a woman can play in both the Jewish community and the wider world,” her family said.

The couple endowed the Ruth and Warren Toltz Young Leadership Award at JEWISHcolorado to inspire future generations of Jewish leaders.

“In living a life of Torah, avodah and gemilut chasadim, Ruth honored her forbearers and her Jewish faith,” her loved ones said.

“She lit the way to a well-lived life.”

Her brother Rick Bugdanowitz predeceased her.

Contributions may be made to the Jewish organization of choice.

Copyright © by the Intermountain Jewish News