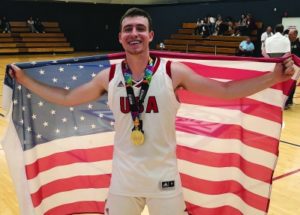 The 14th edition of the Pan-American Maccabi Games took place July 5-15 in Mexico City, where 3,800 athletes from 19 countries compete in 24 sports. This event is held every four years in a cycle two years apart from the international Maccabiah Games held in Israel. The Pan- American Maccabi brings athletes from North, Central and South America, along with others from Australia and Israel.

While various communities’ JCC Maccabi games are played at a regional level, with athletes competing for their respective cities, the Pan-American games are a completely different international ballgame, with athletes from all over the world playing.

Two athletes from Denver competed in the Pan-American Maccabi games: Noah Lewis, 20, who attended Earlham College in Indiana, but will be transferring to Pacific University this fall, and Arielle Williamson, 19, who attends Emory University.

They flew to Mexico City and spent two weeks bonding and building a strong connection amongst their teams.

Lewis played on the USA men’s basketball team which defeated Argentina, 93-52, winning the gold. “It was a good feeling knowing you are representing your country and heritage.” says Lewis. The athletes’ Jewishness and their love for basketball brought them together, and “while these are not necessarily two things that connect, it gives Jewish athletes hope because there aren’t many Jewish pro players. It just shows that anybody can do it,” Lewis says.

Williamson was part of the USA women’s soccer team, which also won the gold. Their final game against Brazil was a real nailbiter. The score for most of the game was 0-0 and they had to win or tie to advance to the final. Not only was the game a challenge, physically, but “the refs were extremely biased against us,” says Williamson. But competing in of and itself was “an incredible experience unlike any other. On the field it felt like every other soccer game that I’ve ever played in my life. But off the field, thinking about the fact that the common thread we all shared was our Judaism was extremely powerful. Every hostile moment on the field was set aside as we would alternate jerseys and celebrate our Judaism with one another,” Williamson says.

She adds, “Though on a different stage, and representing different morals, these games felt very important for the US women’s soccer team considering the victory of the US Women’s National Soccer Team just a few days before our tournament started. I commented that ‘US women’s soccer just keeps dancing’ — a testament to how dominant US women’s soccer is at all levels and on all stages.”

Previous PostJew vs. Jew in Cracow, as established community clashes with Chabad Next PostPhilip Roth's possessions to be auctioned