AMHERST, Mass. — The Yiddish Book Center has digitized and posted works of the Yiddish writer Chaim Grade, one of the great masters of modern Yiddish literature. 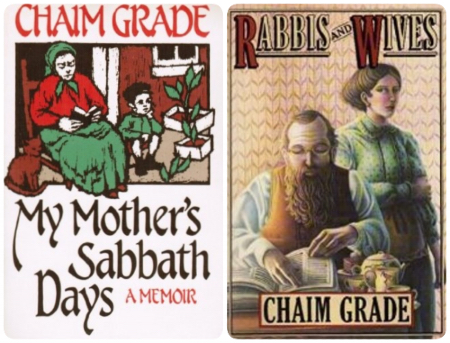 These include many of his most famous novels and poetry collections, published from the 1930s to the 1960s.

Yiddish Book Center Founder and President Aaron Lansky notes, “Chaim Grade was one of the most original, profound, and consequential Yiddish writers of the last century.

“Thanks to our colleagues at the YIVO Institute and the National Library of Israel, we are thrilled to make the Yiddish originals of his most important works available in the Yiddish Book Center’s Steven Spielberg Digital Yiddish Library, where they’re fully accessible for eager readers, scholars and translators everywhere.”

Grade was born in 1910 in Vilna, Lithuania and raised in poverty by his mother. Through his teenage years he underwent intense rabbinical training, but at age 22 he left that behind to become a poet, joining the leftist literary group Yung-Vilne (Young Vilna). During WW II, Grade sought refuge in the Soviet Union.

Later he moved to Paris before immigrating to the US, in 1948, where he began writing novels and gained a wider readership.

According to Yiddish Book Center bibliographer David Mazower, “Chaim Grade is a towering figure in modern Yiddish literature. So much so that when Isaac Bashevis Singer was awarded the Nobel Prize for Literature in 1978, there was a big debate among Yiddish readers about whether Grade was a more deserving candidate.

“The truth is that both authors have a claim to be regarded as among the greatest modern novelists in any language.

“Today the demand for Grade’s Yiddish books from students, scholars, and reading groups far exceeds the few copies that the Yiddish Book Center has available to purchase. So it’s wonderful that so many of his major works will finally be freely available to all as part of the Center’s digital Yiddish library.”

The newly digitized works include Grade’s first major work, “Yo” (Yes), published in 1936, as well as “Musarnikes” (Musarists), an epic narrative poem published in 1939, which displays his ambivalence toward his religious upbringing in the Novorodock yeshiva and remains a cornerstone of modern Yiddish poetry.

The works also include “Der Mames Shabosim” (My Mother’s Sabbath Days), a 1955 memoiristic account of Grade’s life until the postwar years; “Tsemakh Atlas: Di Yeshive” (Tsemakh Atlas: The Yeshiva), a two-volume semi-autobiographical novel, written 1967-68, about his years in the Novorodock yeshiva; and, perhaps his best-known work, “Mayn Krig Mit Hersh Raseyner” (My Quarrel with Hersh Rasseyner), a philosophical 1951 short story that deals with the question of faith after the Holocaust, and which was turned into a 1991 film, “The Quarrel.”

Hersh Raseyner was not a fictional device. He was a disciple of Novorodock musar adherent, Rabbi Gershon Liebman, who founded many yeshivas in France after the war, and who, in Grade’s story, gets the better of the author, Grade himself.

An annotated guide to Chaim Grade on the website provides the full list of titles along with a short biographical essay and related resources in the center’s collections.