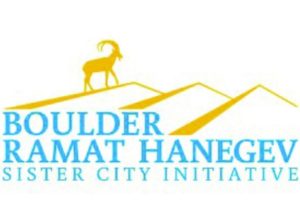 JEWISHcolorado congratulates Boulder on this development, which promises to further enhance Colorado’s current alliance with the region.

JEWISHcolorado has enjoyed a long-standing partnership with Ramat HaNegev, founded almost 20 years ago.

“We have confirmed the bonds of friendship between Boulder and Ramat HaNegev,” says Boulder City Councilman Bob Yates.

“In the coming years, we will strengthen those bonds by exchanging ideas and sharing our respective cultures.”

“Having Boulder join us in this partnership with Ramat HaNegev is great news and benefits all of our communities,” says Rabbi Jay Strear, president and CEO of JEWISHcolorado.

“We share many significant interests with Israel — water conservation and agricultural technologies being some strong examples — and look forward to working with the Boulder-Ramat HaNegev Sister City initiative and Boulder City Council on this new endeavor.”

Ramat HaNegev is an agricultural oasis in the desert of Israel and is a hub for renewable energy development and cybersecurity.

It is known for innovative water research and agricultural technologies, including a cherry tomato strain sold in grocery stores around the world.

Colorado has enjoyed many benefits from this partnership over the past two decades through cultural exchanges, educational exchanges, technology sharing and drip irrigation techniques.

Last year alone, over 430 Coloradans visited Ramat HaNegev and over 300 interacted with delegations that came from Ramat HaNegev to Colorado.

JEWISHcolorado supports several projects in Ramat HaNegev to fulfill the Boulder municipality’s dream of creating an equal and just society for its diverse residents.

JEWISHcolorado supports the building of a high school to serve the area’s teens and provides funding for Nitzana, an educational center for youth and immigrant children situated at the Israel-Egypt border that benefits Bedouins, Jewish refugees, new immigrants and Israel’s at risk youth.

Other projects include investment in Bedouin tourism to help this traditional Arab nomad tribe enjoy economic success and in a therapy center for special needs children.

JEWISHcolorado’s partnership with Ramat HaNegev was formalized as part of Partnership2Gether, an international program between Jewish Federations of North America and the Jewish Agency for Israel.