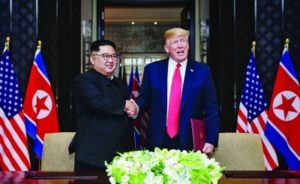 WASHINGTON — Amos Yadlin likes talking about the Begin doctrine, which calls for removing existential threats to Israel before they are manifest — maybe because he lived it twice.

As an Israeli Air Force pilot, Yadlin flew one of the planes that took out Iraq’s nuclear reactor in 1981, when Menachem Begin was prime minister. As director of military intelligence in 2007, Yadlin oversaw the operation that eliminated another nuclear reactor, this one in Syria.

Now the head of Tel Aviv University’s Institute for National Security Studies, an influential think tank, Yadlin suggests that the Trump-Kim summit means America can refocus its attention on another major world nuclear threat, the one that matters most to Israel: Iran.

But there are mixed messages as well in how quickly the meeting seemed to come together, and about what Tehran can expect if they also wish to negotiate.

Yadlin is in Washington, DC, to meet with the Center for a New American Security, a think tank that serves as a holding pattern for top Democratic former national security officials waiting out the Trump administration.

They met to discuss the Iran nuclear deal. Yadlin has met with Trump administration officials on other occasions.

He spoke to JTA about reasons for hope and trepidation following the historic summit in Singapore.

The good news for Israelis, Yadlin says, is that “denuclearization will remove North Korea as the No. 1 US national security issue.”

That’s welcome news because after a year-and-a-half of rising US-North Korea tensions — with intimations of missile attacks on Guam, and Kim and Trump exchanging social media insults — Israel wants Iran to be the top US national security issue.

“Israel understands North Korea is more dangerous than Iran” to the US, Yadlin said.

“They have missiles that can reach the continental US, they do have nuclear weapons,” as opposed to Iran, which does not. “

Israeli Prime Minister Benjamin Netanyahu made that connection in his statement on the summit, slipping in praise for Trump pulling out last month of the 2015 Iran nuclear deal, which swapped sanctions relief for a rollback in Iran’s nuclear program.

Netanyahu commended Trump on the Singapore meeting with Kim and called it “an important step in the effort to rid the Korean peninsula of nuclear weapons.”

“President Trump has also taken a strong stand against Iran’s efforts to arm itself with nuclear weapons and against its aggression in the Middle East,” he said.

“This is already affecting the Iranian economy. President Trump’s policy is an important development for Israel, the region and the entire world.”

The bad news is that Trump appears to be making concessions from the get-go, a signal of what he may be prepared to do should Iran come around to renegotiating the nuclear deal that Trump just abandoned, and also a signal to Iranian leaders of what they can ask for if they play nice.

The bad news for Iran’s leadership is that there’s good news for Trump. “They are worried that Trump achieved not everything, but unlike the expectations he would fail with North Korea, he is succeeding, and this made him strong vis-a-vis Iran,” Yadlin said.

The spare page-and-a-half document signed by Trump and Kim, however, may be seen as encouraging in Tehran.

“The fact that there are no numbers or red lines or goals gives them some leeway to negotiate,” he said of the Iranian leadership.

Yadlin said the process with North Korea so far seems personality driven — Trump and Kim heart one another, for now. He likened that dynamic to the chemistry between former Secretary of State John Kerry and Iranian Foreign Minister Javad Zarif that helped drive the 2015 deal that Trump reviles.

“What I’m amazed at is how much in some aspects, the Trump administration having been portrayed to be ‘anything but Obama,’ at the end of the day is behaving in a very similar way as far as logic and decision making,” he said.

Iran is not North Korea, Part I

Yadlin said Israel would not be overly concerned at Trump’s apparent ambition to pull the US out of the peninsula for two reasons:

• Israel fights its own wars. The American involvement in the peninsula involves a risk to US lives — there are 30,000 US troops in South Korea — and decreasing direct American military involvement is key to Trump’s doctrine.

“Israel never asks America to shed blood for us in the Middle East,” he said.

“This is not the case in Korea, where the US fought a very bloody war. Israel is strong enough to cope with its traditional enemies in the Middle East.”

• The US has vested interests (read: oil) in remaining in the Middle East.

While Israel fights its own wars, it also appreciates the war games it performs with the US military as a deterrent to Iran. The exercises are a sign that Israel’s powerful ally isn’t going anywhere soon — or was a sign until Trump started talking about retreat.

But Yadlin said he does not expect the US to substantially lower its Middle East profile, if only to protect its energy interests and a key passage for commerce between Asia and the West.

North Korea poses the greater rogue nuclear threat to the US because it possesses nuclear weapons and due to the range of its missiles, which are believed to be capable of reaching the continental US.

But Iran poses a less tractable threat because unlike Kim, whose nuclear ambitions are a matter of self-preservation, Iran wraps its nuclear planning into its ambitions for regional hegemony.

“Iran has developed two strategic aims: You need a nuclear arm to immunize you in order to achieve regional hegemony using conventional arms,” Yadlin said, “and the conventional force aims to take Tel Aviv and Riyadh hostage so the nuclear arm won’t be attacked.”

Yadlin said this is how North Korea has operated, targeting Seoul with devastating conventional weapons as a means of deterring strikes on its nuclear capabilities.

Israel is alarmed by Iran’s development of a similar devastating conventional missile capacity in Syria, where Iran is working with its ally, the Lebanese militia Hezbollah, to prop up the Assad regime.

He elaborates on the conventional Iranian threat to Israel this week in The Atlantic.

That brings Yadlin back to the Begin doctrine and preemption.

“It may apply to the advanced Iranian missile operation in Syria,” he said. “It could come to a level that threatens Israel not as an existential threat but just below it.”