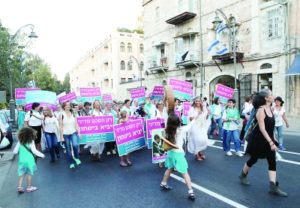 Some 4,500 women — Jews and Arabs, religious and secular, all dressed in white and turquoise —made their way from Jaffa Gate in Jerusalem’s Old City towards Independence Park on Sept. 20 to celebrate the International Day of Peace.

The rally was organized by Women Wage Peace, a grassroots movement that was founded following the 2014 Gaza war.

Further afield, thousands of Israeli and Palestinian women sang the American civil rights anthem “We Shall Overcome” in three languages — at Avital Volcanic Park in the Golan Heights, close to the Syrian border; at Kibbutz Hanita and Kibbutz Maoz Haim along the Israel-Jordan Border; at Kibbutz Nir Am on the Gaza; on the border with Egypt near Eilat; and in Umm Al-Fahm, an Israeli Arab village close to the West Bank.

“We have been always told the borders are impenetrable, but we believe it is always possible to build bridges from person to person,” said Yael Treider, one of the coordinators.

“We want to raise awareness and engage the public in a discussion about a political resolution. The main goal is to create opportunities for dialogue with individuals and groups,” said Yael Admi, one of the group’s founding members who lost her brother when she was 12. From that moment, she decided to dedicate her life to promoting peace.

Women Wage Peace numbers about 40,000 members from across the political spectrum and the country, including Arab and Jewish women from left-wing kibbutzim to right-wing settlements in the West Bank.

Liora Hadar, 42, came to the rally from the Alei Zahav settlement, to meet her friend Ghadir Hani, an Arab-Israeli woman originally from Acre now living in Beersheba.

“We spent many hours together organizing and participating in coexistence projects between Israelis and Palestinians,” Hadar and Hani said, while their friends were dancing in a drum circle. “We may not agree on many issues, but we still believe that only if we engage in dialogue, we can reach an agreement,” they added.

Addressing the violence of the Palestinian-Israeli conflict, Hani said her friendship with Hadar has helped her to better understand the other side.

“When the Netiv HaAvot settlement was evacuated, I could feel the pain of the families that had to leave their home. I am in contact with many Bedouin families that were evacuated too, and the pain is the same,” said Hani.

Hadar says she understands that an agreement could also mean painful concessions.

“What is important for all of us is to reach a peaceful agreement. The history of Judea and Samaria (the West Bank) is very important to me. I am a religious woman, but it’s worth it to put a question mark on places such as Joseph’s Tomb. If giving up some places can bring true peace . . . we should think about it seriously,” Hadar said.

When asked whether their families support their activism in Women Wage Peace movement, Hadar said her ideology is not welcomed at home. “They tell me is I am wasting my time and laugh at me.”

But Hani’s family has always participated in peace rallies. “I grew up in Acre, a city of coexistence,” she said.

Wala Abusnema, dressed in a traditional Muslim head covering, who lives in Jerusalem’s Old City, as well as her friend Ayelet, from Mevaseret Zion, near Jerusalem came to the event by chance.

“We were shopping at the Mamilla Shopping Mall when we saw all these women dressed in white walking and singing for peace,” said Abusnema.

Asked why they decided to join the march, both girls said they believe in peace.

“[We] are very good friends, we met at work, we are both social workers,” they said. “It’s important to believe in peace.”

“My family always voted for right-wing parties, but I think peace doesn’t belong to the right or the left, Ayelet said. “We should all believe in it and work to achieve it.”