Home Features Before he was King, Charles was patron of Cracow’s JCC

Before he was King, Charles was patron of Cracow’s JCC

The founder of one of the first US-style Jewish community centers in the former-communist Eastern Europe, formed after the Iron Curtain fell three decades ago, says the institution owes its existence to the man who earlier this month became leader of the Church of England. 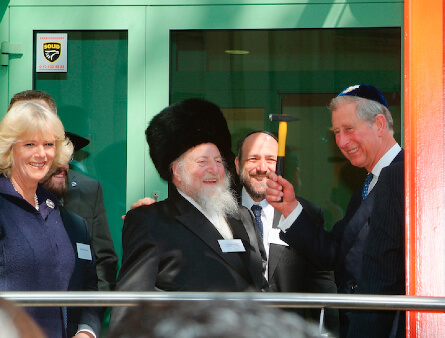 King Charles III, then the Prince of Wales, at the 2007 dedication ceremony for the JCC in Cracow, Poland, of which he was patron. His wife Camila, now Queen Consort, can be seen at left.

The former Charles, Prince of Wales became monarch upon the death on September 8 of his mother, Queen Elizabeth II, and also became the Church’s “Supreme Governor,” with the title of “Defender of the Faith” (though he has indicated that he prefers to be known as the more ecumenical “Defender of Faith”).

In his earlier role as the crown’s heir apparent, he was the patron, or leading funder, of the JCC Krakow, which opened in 2008.

Without the involvement of the then-prince, the JCC would not exist, says Jonathan Ornstein, its executive director. “No question. No question,” he repeats. “It was his idea. He made it happen.”

Though not the first JCC established in Eastern Europe after communist-era suppression of Judaism ended (Budapest’s preceded it, in 1994), Cracow’s JCC [the institution uses the Polish spelling Krakow], the first one in Poland, plays a symbolic role in the region because the country was the home of the world’s largest Jewish population before WW II, and was the location of the largest number of Holocaust victims.

The spiritual significance of anything Jewish that takes place in Poland often exceeds the event’s size.

Especially in Cracow, 46 miles from Auschwitz.

“There is a symbolism in the world,” because the JCC — its slogan is “building a Jewish future” — is a sign of a Jewish revival in a land often associated with widespread death during the Final Solution, Ornstein says in a telephone interview.

Cracow’s JCC, which calls itself “the sole provider of Jewish continuity programming” in the southern Polish city, is located in a refurbished, four-story, 9,100-square-foot building in the historic Kazimierz district.

It grew out of a visit Charles made to Cracow in 2002. After arranging to meet with several aging Holocaust survivors at a café, he “discovered that there was a great lack of somewhere where the community could concentrate, could meet, and develop their own culture . . . and celebrate all the things that matter to the Jewish community,” he stated at the JCC’s opening. A senior center or old age home was suggested to the Prince.

He had a bigger idea.

“I am afraid I rather interfered,” expanding upon the suggestions he heard, he said; back in London, he was put in touch with the World Jewish Relief humanitarian philanthropy organization, discussions with which, and with leaders of the Cracow’s small-but-growing Jewish community, grew into what became an inter-generational JCC.

“He said he would help. He kept his word,” Ornstein says. “He cared very much.”

The JCC, which also received initial financial support from the Joint Distribution Committee, is among some 400 institutions around the world of which Prince Charles served as patron.

Though his interests centered around the environment, and youth, his patronage support included such recipients at World Jewish Relief, the Holocaust Memorial Day Trust, and Jewish Lads’ and Girls’ Brigade.

King Charles and his late mother had a long history of “warm relations with the United Kingdom’s Jewish community,” Ornstein says.

A plaque on the JCC Krakow building identifies it as “The Prince of Wales Jewish Community Centre.”

As patron, the Prince contributed an amount of his own funds — the details were not made public — to establishing the JCC; the $800,000 project “was launched largely thanks to his patronage,” the Krakow Post reported.

As prince, Charles and his wife, the then-Duchess of Cornwall, participated in the building’s 2008 dedication; he wore a dark blue velvet kippah that bore his royal seal.

Ornstein says he chose a primary English-language name (JCC) for the institution, rather than a Polish one (centre, the British spelling, rather than the US center, as recognition of Charles’ patronship) by which it is also known, because JCC is brand known internationally.

Cracow, which had a pre-war Jewish population of 60,000, now is home of an estimated few hundred affiliated Jewish adults — including many Holocaust survivors.

The JCC gears many of its activities to the survivors. The institution serves as a community gathering place, hosting a wide variety of social, educational and religious programs, including the first Jewish kindergarten opened there since before WW II.

Ornstein says Eric Fingerhut, CEO of Jewish Federations of North America, recently stated that many members of the Jewish community know two JCCs — their own, and the one in Cracow.

Charles’ royal prestige is credited with drawing initial attention to the nascent institution.

“When King Charles expressed concern for Holocaust survivors and the Jews of Cracow it was a complete game changer,” says Michael Schudrich, Poland’s chief rabbi.

Once the then-Prince “came back to London and spoke to the Jewish community there that he was concerned with Holocaust survivors and other Jews of Cracow, it immediately mobilized the UK community and soon after we had our outstanding JCC building of Cracow,” the rabbi says.

“Thanks to the King, the Jewish World Relief of the UK along with the local Jewish community of Cracow and other individual donors helped to make the JCC a reality,” says Rabbi Schudrich, a Long Island native.

He calls that JCC “one of the most amazing JCCs in Europe [which] clearly has inspired many other communities around Europe. There is no question that King Charles’ commitment to our JCC Krakow makes it unique and special the world round.”

“From a purely Jewish point of view, the new King’s record looks good,” Rabbi Jonathan Romain, spiritual leader of the Maidenhead Synagogue in England, said in his Shabbat sermon this week, two days before Queen Elizabeth’s funeral. “He has visited numerous Jewish institutions [and] has also shown acute awareness of horrors of the Holocaust and often met survivors.”

The rabbi, whose mother came to England on the wartime Kindertransport, has served since 1980 in Maidenhead, 30 miles west of London. He pointed out that King Charles’ coronation ceremony, while Christian in nature, will likely include “representatives from other faiths,” reflecting “the multi-faith nature of the country over which he is to reign.”

As Prince, Charles followed the activities of Cracow’s JCC, frequently referring to it in speeches, says Ornstein, who updated the Prince during a visit to London four years ago. “He kept in touch. We kept in touch.”

And the JCC, of course, followed events in the life of Charles.

On Friday morning last week, Sept. 2, Ornstein said, the royal family would be saluted at that evening’s Shabbat services at the JCC. “We will raise a glass to the Queen and to the new King.”