Are you suffering from cabin fever? Were you forced to cancel travel plans this summer? Being in Colorado, a beautiful getaway is never far away, but that’s different from a vacation planned for a more exotic location.

Well, I’ve got a solution for you: The “Mission Impossible” franchise starring Tom Cruise. My husband finally convinced me to try the series. So far I’ve been to Paris, London, Moscow, Dubai, Mumbai and Kashmir. (Devoted fans may be able to figure out which two installments I’ve watched.) Not bad for being stuck at home!

The movies are simply fun, packed with cliff-hanging (literally) action, stunning camerawork and a current of dry humor throughout. And, of course, an amazing soundtrack based on Jewish-Argentine composer Lalo Schifrin’s music for the original TV series.

I’ll be honest: Sometimes I can’t even grasp all the details of the mission, but somehow that doesn’t ruin the fun; the outlandishness only adds to it.

Also on the entertainment front, I’m thrilled that Denver Public Library has begun accepting requests. I went a little crazy the first day it opened and picked up a six-book stack last Friday.

During the lockdown I kept updating my list of “Books to Read,” so the result is eclectic. Among the stack are I Wanted Fries With That by fellow Brandeisian Amy Fisch and After the Wind by Lou Kasischke.

The latter is about the deadly 1996 Mt. Everest expedition brilliantly retold by journalist Jon Krakauer in Into Thin Air — which I just re-read, thereby re-triggering a slight obsession I had with the topic some years back.

Kasischke’s book wasn’t yet published at that time. I’m looking forward to reading his perspective on the tragedy.

But the book I was most intrigued by, and started first, was Nikolenka’s Childhood, a children’s book written by Leo Tolstoy based roughly on his childhood. 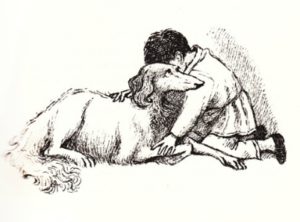 The book, which came to my attention only recently, is illustrated by one of my favorite illustrators, Maurice Sendak. To read the words of the great Russian writer, punctuated by Sendak’s signature drawings, is a remarkable experience.