‘Time Tunnel’ — Japan and the Jews

As Israel this year marked 70 years of diplomatic relations with Japan, Haifa’s Tikotin Museum of Japanese Art last week launched a major art exhibit titled “Time Tunnel — Japan and the Jews,” displaying the work of five leading Japanese artists with a focus on the Holocaust. 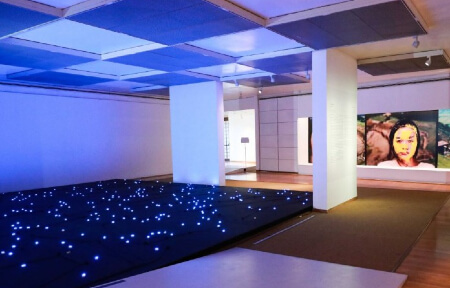 The Sea of Time,’ part of ‘Time Tunnel — Japan and the Jews,’ at Haifa’s Tikotin Museum. (Anat Charmoni)

All five artists flew to Israel to attend the opening.

The Tikotin Museum is the only museum in the Middle East dedicated to preserving and highlighting Japanese art. The museum’s original collection belonged to Dutch Holocaust survivor Felix Tikotin, who hid his art from the Nazis.

In 1956, Tikotin decided he wanted to bring his collection to Israel, where it found its home in a Haifa pavilion, before becoming a full museum several years later bearing his name. The museum currently houses more than 8,000 pieces of art.

The exhibit, which will be open to the public for the next six months, is heavily inspired by the well-documented humanitarian actions of Chuine Sugihara, a Japanese diplomat based in Lithuania during WW II.

Without permission from his superiors, Sugihara issued thousands of transit visas for European Jews to Japan, thus saving more than 6,000 people during the height of the Holocaust.

In 1984, Yad Vashem recognized Sugihara as a “Righteous Among the Nations.”

“The narrative of the Sugihara rescue isn’t well known, neither in Israel nor in Japan,” Etty Glass Gissis, the museum’s curator, said, explaining the importance of the exhibit and the focus on Sugihara. “Many people know the story of [Oscar] Schindler, but few know the story of ‘Sugihara’s children,’ those people he saved.”

Gissis said that some of those who were saved by Sugihara as children arrived in Haifa for the opening of the exhibition.

“It was very important to launch this exhibit while the survivors are still with us,” she said. “The survivors, and their descendants, were involved in the main installation of the exhibit.”

That central piece is a work developed by renowned artist Tatsuo Miyajima titled “Sea of Time.”

It welcomed contributions from more than 300 people, mainly people saved by Sugihara and their family members, to convey a message of the power of tolerance and mutual understanding as human values, providing a visual counter-balance to the hatred of the other that motivated the Nazis.

Situated over a 50 square meter space, 300 lights feature the individual perspectives provided by people from across the Israeli demographic, as well as by Jews from around the world, relating to the theme of humanism as demonstrated by Sugihara. 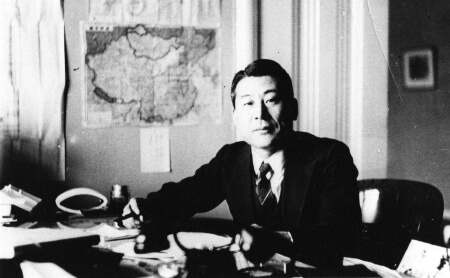 In another installation created by Miyajima titled “Train to the Shoah,” the artist also relies on his trademark use of LED lights bearing numbers that travel around the gallery to provide a stark visual of humanism.

Other elements of the exhibition include displays in lights and shadows of archival photographs taken by Japanese who encountered Jewish refugees fleeing the Nazis and their helpers.

The photos, provided courtesy of the Tokyo Photographic Art Museum, were captured by the Tampei Photography Club, a group of six photographers who traveled from Osaka to Kobe where the Jewish refugees had arrived in February, 1941. Each photo is combined with a tanka (a five-line, 31-syllable poem) written through the lens of a 10-year-old girl encountering the Jews for the first time, composed by poet Hiroko Yamagata.

Yotam Yakir, CEO of Haifa Museums, a group of six institutions including Tikotin, said, “This isn’t just another exhibition, this is a major project of great artistic and educational value with the potential of attracting many youths and students to see the artwork from a very rare angle, created by Japanese artists as they relate to the Holocaust.

“The events of the Holocaust contain universal lessons that deserve understanding by all cultures and peoples, and we are hopeful that through the lens of Japanese art we will all be offered a new perspective on both the tragedy and the heroism that defines this period and the dramatic, and often untold story of Japan and the Jews.”

The exhibition is a celebration of the ties between Israel and Japan, Yakir said.   “It is not a coincidence that the exhibition was launched this year as we are celebrating 70 years of the special relationship between Japan and Israel. The Japanese embassy in Israel was deeply involved with this project.”

MK Zvi Hauser, chair of the Israel-Japan Parliamentary Friendship Council, said that not only was he pleased about the exhibit, but he stressed that Israelis and Japanese have a great opportunity to work together as close allies in many spheres.

“We are two ancient civilizations who know how to learn from our pasts and look forward to the future to make the world a better place through innovation,” said Hauser. “We have a very good relationship, but we should upgrade it even further because there is great potential to work together.

“Not only can we work together bilaterally, but thanks to the countries that signed the Abraham Accords, there is now a fantastic platform for trilateral relationships between Israel, Japan and countries in the Middle East, and we can have a huge effect on the region,” he said.

“At the same time,” said Hauser, “there is potential for Israel, Japan and the US to work together trilaterally, and create a lasting impact over the next 70 years.”

More information on the exhibit can be found at www.tmja.org.il/eng.