The mood throughout Israel was somber on Friday, April 27, as the name of the last of 10 missing youths killed in a flash flood near the Dead Sea was released, following the recovery of her body in the early morning hours.

Ilan Bar Shalom was the last teenager to be recovered, as emergency search-and-rescue and elite army units raced against time in the hopes of finding her alive. 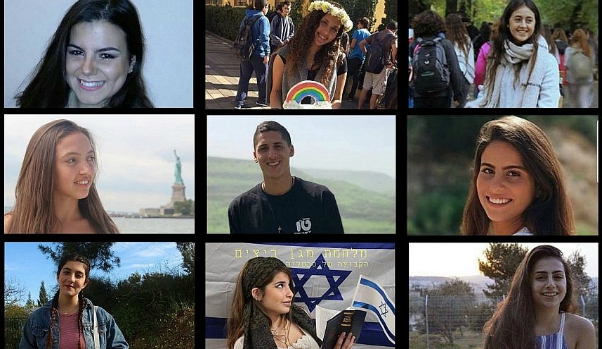 Nine of the 10 victims who drowned in a flash flood near the Dead Sea on the April 26. (Facebook)

The 10 students killed in flash flooding during a hike at Nahal Tzafit on Thursday, April 26, were part of a group of 25 young people who been accepted to the Bnei Tzion pre-military academy in Tel Aviv, and were participating in an excursion meant to build comraderie prior to the beginning of the program in September.

Survivors told rescue teams that a massive wave of water as high as 13 feet tall smashed into part of the group as it walked through a dried riverbed, washing 10 of the 25 students away. The 15 who managed to avert the wave or climb out of the water were saved by rescue teams and treated for light injuries and hypothermia.

The victims of the tragedy were:

Tzur Alfi from Mazkeret Batya, the only boy killed in the tragedy, who the head of the Mazkeret Batya Regional Council called “a child with values, a sociable person who aspired to be an educator.”

Ella Or of Ma’ale Adumim, who was described by her five siblings in a statement as “the most beautiful flower, the most charming and sweet smile, always caring, always embracing, always optimistic, the most talented and successful sister in the family.”

Yael Sadan of Jerusalem, a graduating dance student in Jerusalem’s High School for the Arts, who her dance teacher described as “a stunning, smiling girl with a sense of humor, a talented dancer, and a skilled choreographer.”

Agam Levy from Herut, whose grandfather talled Walla news that she “was persistent, studio, and endlessly volunteering, having tutored sick children in Africa and taught in a school in Vietnam.
Shani Shamir of Shoham, whom the town’s mayor called “the daughter every parent hopes for. Smiling, wise, brilliant, a leader,” in an interview with Kan public broadcasting.

Adi Raanan of Mikhmoret, whose funeral will take place in her town on Sunday afternoon.

Romi Cohen of Maor, near Hadera, who will be buried at noon at the Maor cemetery.

Maayan Barhum of Jerusalem, whose funeral will take place alongside Sadan at 12:30 p.m. at the Givat Shaul Cemetery in Jerusalem.

Ilan Bar Shalom from Rishon Letzion, the last to be found. No information has been provided on her funeral.