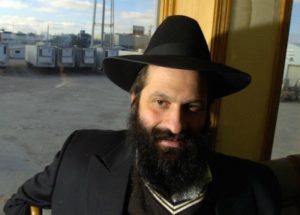 Sholom Rubashkin, pictured in 2004, when he was vice president of Agriprocessors. (Zbigniew Bzdak/Chicago Tribune/TNS via Getty)

WASHINGTON — President Donald Trump commuted the sentence of Sholom Rubashkin, the chief executive of what was then the largest kosher slaughterhouse in the country, who was convicted of bank fraud and money laundering.

Trump cited appeals from across the political spectrum in making the move.

“In 2009, he was convicted of bank fraud and sentenced thereafter to 27 years in prison,” a statement Dec. 20 by the White House said.

“Mr. Rubashkin has now served more than eight years of that sentence, which many have called excessive in light of its disparity with sentences imposed for similar crimes.”

The statement described the commutation as an “an action encouraged by bipartisan leaders from across the political spectrum, from Nancy Pelosi to Orrin Hatch,” referring to the Democratic leader in the US House of Representatives and the Republican senator from Utah, respectively.

“This action is not a Presidential pardon,” the statement said.

“It does not vacate Mr. Rubashkin’s conviction, and it leaves in place a term of supervised release and a substantial restitution obligation, which were also part of Mr. Rubashkin’s sentence.”

A massive federal immigration raid in 2008 at the Agriprocessors meatpacking plant in Postville, Iowa, led to the arrest of nearly 400 undocumented Guatemalans and Mexican workers.

Rubashkin was charged a year later on the bank fraud and money laundering charges as he tried to sell the company, which was on the verge of bankruptcy. He was convicted on 86 counts.

Advocates for Rubashkin, among them prominent legal and political figures, later offered evidence that they said showed prosecutors tampered inappropriately with the case.

They provided affidavits showing prosecutors scared off potential buyers by saying they would seize the company if a Rubashkin family member was involved in the purchase.

As the company’s value plummeted, Rubashkin masked its poor financial health, leading to the criminal charges, according to this argument.

Rubashkin, a member of the Chabad Lubavitch movement, is 57. He has 10 children, which Trump noted in his commutation.

Billionaire Hershey Friedman of Montreal purchased the meatpacking plant in 2009 and rebranded it as Agri Star Meat and Poultry.