SAN FRANCISCO — Five months after canceling its planned trips to Israel, and then — following outrage from Jewish organizations — apologizing days later and saying the trips would be reinstated, the Sierra Club has quietly posted a new excursion to Israel for next year. 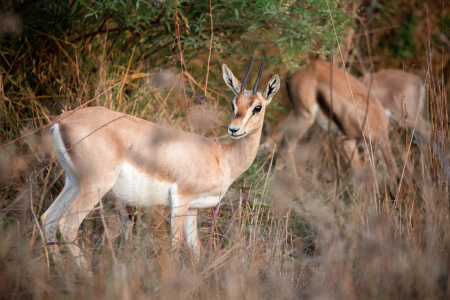 Called “Natural and Historical Highlights of Israel,” the two-week trip in March, 2023 will include many of the same activities the Sierra Club offered before activists convinced the environmental organization to cancel Israel outings: snorkeling, bird watching, nights on a kibbutz and a visit to Tel Aviv.

Participants also will meet Palestinians working on conservation to hear “first-hand about their daily and ongoing challenges,” according to the itinerary that was posted Aug. 12.

The itinerary lists a visit to the Arava Institute, which brings Israelis, Palestinians, Jordanians and students from around the world together for environmental studies and research. The institute’s motto is “Nature knows no political borders.”

The planned trip is the latest development in a saga that saw one of the country’s oldest and most influential environmental groups — which traditionally avoids politics in favor of a big-tent approach to environmental conservation — embroiled in a public controversy that drew ire from large Jewish organizations and prompted intervention by California politicians.

Jesse Gabriel, a California Assembly member who chairs the California Legislative Jewish Caucus, joined a virtual meeting with Sierra Club Executive Director Dan Chu along with other members of the caucus after J. broke the story March 11 that the Sierra Club had indefinitely postponed its trips to Israel at the urging of groups who claimed Sierra Club was “greenwashing” the conflict.

The Sierra Club is headquartered in Oakland.

“It immediately caught my attention, as it did for a number of my colleagues in the [caucus],” Gabriel said.

“A lot of us do work in the environmental space and have good relationships with the Sierra Club. People were obviously very upset by that, and very disturbed by it.”

ADL CEO Jonathan Greenblatt met with Sierra Club leadership in March and said he was “encouraged” by those conversations.

“Experiencing Israel through its environment, geology, history and people does not negate, nor ‘greenwash,’ the pressing reality of the Israeli-Palestinian conflict,” he wrote in an open letter to Chu.

Among the organizations that urged Sierra Club leadership to scrap its Israel outings were the US-based Palestinian advocacy group the Adalah Justice Project, the Indigenous rights group the NDN Collective, the Movement for Black Lives coalition and the anti-Zionist Jewish Voice for Peace.

The groups said that the Sierra Club was supporting an apartheid regime and providing cover for Israel’s mistreatment of Palestinians by celebrating its environmental stewardship.

The groups, many of which support boycotts of Israel, celebrated after Sierra Club decided to scrap its Israel trips and removed all mention of them from its website.

JVP called it a “positive step forward for environmental justice and Palestinian freedom.”

But the groups soured after Chu published a statement March 15 apologizing for Sierra Club’s decision, saying it was made “hastily,” and that new trips to Israel would be on offer “soon” and would involve “input from a wide range of partners.”

“In February, we demanded Sierra Club cancel Israel outings greenwashing Israeli colonization and its disastrous impact on the Palestinian people,” a joint statement from the Adalah Justice Project and the NDN Collective read.

Along with Jewish Voice for Peace, the groups urged a social-media campaign to push back at the Sierra Club on Instagram and Twitter.

“There can be no environmental justice without Indigenous sovereignty and Indigenous people leading the way,” another post read.

The San Francisco-based office of the ADL welcomed the news. “As the itinerary highlights, Israel is rich in history and home to many natural wonders and initiatives of interest to anyone who is concerned about the environment,” said Seth Brysk, the ADL’s regional director.

“Experiencing Israel through its environment, geology, history and people provides essential opportunities for first-hand enriching engagement into the many complex issues that must be globally addressed.”
The two-week trip is scheduled to depart March 14 and has a capacity of 15 people.

It costs $5,455 per person, and will include floating in the Dead Sea, a hike up Masada and a visit to Eilat, one of the world’s most important stop-over sites for migratory birds.

The itinerary also includes visits to a Druze village, the Bahai Temple in Haifa and an “eco village” where Palestinians and Israelis work together on water conservation issues.

The trip leader is Shlomo Waser, a Bay Area resident who was born in Israel and holds a life membership in the Sierra Club. Waser did not respond to a request for comment.

Internally, the episode created uncertainty and tension within the Sierra Club. Its leadership was split on the decision, which alienated some longtime members and volunteer leaders.

David Neumann of Oregon, who has led outings since the 1970s, saw the decision as indicative of a pendulum swing left, which he said was off-putting to a number of longtime members he knew. Neumann is Jewish and said the news hit him hard: “I haven’t had a lot of sleep lately,” he said at the time.

The Sierra Club earlier this month warned its employees about the new trips to Israel and the challenging feelings they might engender, according to a note obtained and published by the Adalah Justice Project.

“Sierra Club will announce details of an upcoming outing to Israel and Palestine,” said the note, which was addressed to Sierra Club managers.

“We have created optional spaces . . . to equip managers to support their teams and support people on their teams as well as managers who have identities related to Palestine and Israel.”

The group did not respond to requests for comment.

But it addressed the Israel controversy in a public statement earlier this month that situated the episode within the Sierra Club’s efforts to examine its own role “in perpetuating white supremacy.”

Founded in 1892, the group was “basically a mountaineering club for middle and upper-class white people” in its early years, it has said in previous public statements. Recently, the group has made internal changes, including by rethinking, for example, its veneration of Sierra Club founder John Muir, the turn-of-the-20th-century naturalist who made derogatory comments about black and Indigenous people.

The controversy over the Israel trips became “a critical inflection point in our journey to becoming an organization that fully illustrates anti-racism, balance, collaboration, justice and transformation,” the Sierra Club said in a statement titled “Toward Just and Transformative Outings.”

The Sierra Club again apologized for its abrupt decision to cancel the trips, both for derailing planning that had already taken place by trip leaders and participants and because of anger from “some of our Jewish community members who perceived our decision as a political statement.”

The decisions to cancel and then plan new trips “were perceived as conflicting, were made in quick succession, and ultimately perpetuated harm and confusion throughout our entire community, especially our our Palestinian, Indigenous, Arab, Middle Eastern, Muslim and Jewish staff, volunteers, members and partners,” the statement said.

“While we intended to satisfy our various and valued partners, our execution caused an adverse reaction that led us on a path of repairing and rebuilding with key members of our community — including our volunteers, our staff, our partners, our members and our donors — who were deeply harmed and frustrated by not only the original trip, but by the non-consultative process that ensued.”

The IJN edited this story.