Pills that keep on pumping

Sometime after I became a Swiss citizen I received a package in the mail from the Swiss federal government. Inside was a slim box of 12 pills. I was both confused and intrigued. It seemed they were some kind of antidote in case of exposure to nuclear radiation. I made sure to keep these pills, but I kind of forgot about them — until earlier this week, when I started watching the series “Chernobyl.” 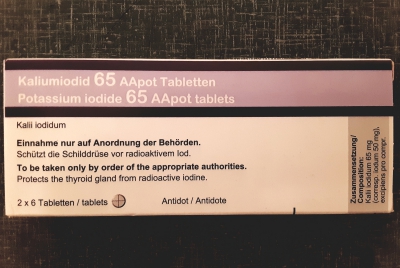 In case of exposure to nuclear radiation

The show is masterful. It deconstructs the ideological illness that defined the Soviet Union, where objective truth didn’t exist, only political narratives did. It does this slowly and deliberately, building up the tension, never straying from the human impact of the story. It’s incredibly frightening, not only that the accident occurred, but, perhaps even scarier, how it was dealt with by Soviet authorities, whose efforts ranged from the misguided to the malfeasant.

Somehow, having those pills in my possession made the show even spookier. These were the pills that the Soviet citizens exposed to the radiation needed — and didn’t have.

Two summers ago, while in South Dakota I visited the fascinating Minuteman Missile National Historic Site. I felt like I was in the 1980s movie “War Games,” whose opening scene replicates the environment of such a nuclear missile silo control center.

The proprietors of the inn where we stayed described to us what it was like knowing that these missiles were on their property. But while the silos in South Dakota have been decommissioned, that’s not the case in Colorado.

After crossing back into Colorado via Nebraska, we began noticing the same type of fenced off areas that once dotted South Dakota ranch land. Apparently, there are nuclear-tipped warheads deep underground here in our state. It’s pretty scary to know that you’re just a few feet away from a weapon of mass destruction. It makes me grateful that I have those pills. Talk about false security.

Previous PostHouse Democrats must stand up to ‘Squad’ Next PostTo whom does the West Bank belong?