On Sept. 13, the New York State Board of Regents voted to allow significant oversight of all non-public schools in the state; it is a measure many say is aimed squarely at Orthodox yeshivas. 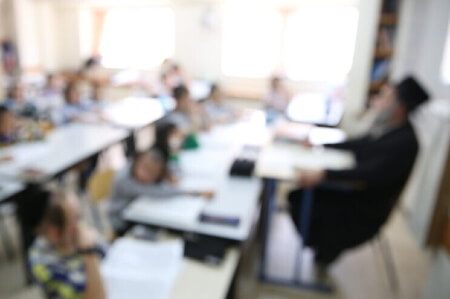 A classroom in a Jewish religious boys school. (David Cohen/Shutterstock via JNS)

The vote follows several years of lobbying by individuals and groups claiming that children who study in yeshivas, particularly chasidic schools, receive little to no secular education and are ill-prepared for life outside of their communities.

Complaints about chasidic schools — boys’ schools in particular, as girls tend to have class time allotted for secular subjects — were laid bare in a Sept. 11 article in The New York Times.

The five-page piece claimed that “generations of children have been systematically denied a basic education, trapping many of them in a cycle of joblessness and dependency . . . [T]he students in boys’ schools are not simply falling behind. They are suffering from levels of educational deprivation not seen anywhere else in New York.”

Community leaders and parents in the chasidic and haredi Orthodox communities, however, believe their schools are providing the education that they want for their children.

Of the 350,000 public comments received about potential changes to the oversight by the New York State Dept. of Education in the months before the Sept. 13 vote, “the vast majority of comments expressed philosophical opposition to state regulation of non-public schools,” according to a report it released late last week.

Many of those who oppose the state’s move believe the question isn’t really one of the quality of the education, but who gets to decide what a child learns: the parents or the state.

“Personally, I’m extremely upset by where we are at. As a mother and grandmother of yeshiva students and as a yeshiva-educated graduate, I don’t want any government entity telling us what we should and should not teach our children,” said Rivkie Feiner, who lives in suburban Rockland County, NY, adding “I don’t want them butting in at all. Leave us alone.”

She readily acknowledges that some aspects can be improved upon, but Feiner believes that it is up to parents to make the choice of whether they accept the status quo or not.

“I want my children educated, that’s not the issue,” she said emphatically. “It’s just that I want myself and my husband to choose, not the government.”

‘Tradition-bound and resistant to changing norms’

According to a 2020 report by the Manhattan Institute think tank, more than 440,000 children were enrolled in a non-public school in New York state for the 2018-19 school year, including some 170,000 students in Jewish schools — a number that includes modern Orthodox day schools, community day schools, and haredi and chasidic schools.

“Jewish schools are now the largest group of private schools in the state and educate more students than do charter schools,” stated the report. “Religious schools exist on a different dimension from exclusive private schools. Here, parents seek education for their children grounded in their own culture and faith traditions.

“Religious schools are often tradition-bound and resistant to the rapidly changing social and educational norms that some perceive in public schools,” it continued. “This was true of Catholic schools in their heyday, and it is true of Orthodox Jewish schools today.”

But it is that rigidity — the binding to tradition and resistance to educational change — that the proponents of oversight are concerned about.

As Hilly Rubin, a resident of the heavily chasidic neighborhood of Borough Park in Brooklyn, told the Times: “They could have education and still have the religion. But they don’t, and the people are suffering so much.”

According to the Times report, when the Central United Talmudical Academy gave a state standardized test to its students in 2019, all of them failed. Furthermore, the paper said, 99% was “the failure rate among the thousands of students at chasidic boys’ schools who took standardized tests in 2019. Nearly half of all New York students passed them.”

In a statement, YAFFED — Young Advocates for Fair Education, a group made up of former students in chasidic and haredi schools, which had pushed for government oversight, said the regulations “would be a major first step to bringing oversight, enforcement, and accountability to many schools that have failed to comply with the law for years.

“Tens of thousands of children have been, and continue to be, denied a basic education in dozens of ultra-Orthodox yeshivas, primarily in chasidic boys’ schools, across New York. Currently, in elementary and middle schools, those yeshivas only provide a maximum of 90 minutes of secular education a day, limited to instruction in basic English and arithmetic. In high schools, they provide ZERO secular instruction. There is no English, no math, no science, no social studies. Nothing,” said the group.

They added that the regulations are “far from perfect and contain some significant loopholes, but they constitute a significant step towards advocating for the rights of all children in New York State to receive a sound rudimentary education.”

Under the new regulations, schools can pick one of two pathways towards evaluation. For the “substantial equivalency pathway,” for instance, schools can provide evidence of accreditation from an approved agency or a marked improvement on grade-level, state-approved assessment exams. Otherwise, a school can choose the “local review option,” in which a “local school authority,” such as a district superintendent, will come in and evaluate the education and curriculum.

‘Many parents have concerns’

According to Avrohom Weinstock, chief of staff at Agudath Israel of America, the oversight has the potential to override a parent’s right to choose the school that works best for their child.

He noted that some of the biggest concerns parents and schools have is exactly how the oversight will be conducted.

“Will it, as some have suggested, be a local official walking through the school building with a clipboard?

What if a subject is not being taught in the way the state prefers? What if the particular official doesn’t like a teacher, which the regulations state must amorphously be deemed ‘competent’ by the state? What if the parent who pays to send her child to a certain yeshiva doesn’t want a certain subject taught altogether?” said Weinstock.

“There is concern that this may lead to [attacks] on certain values,” said Weinstock. “Society is always changing, and no one knows where society will be in five or 10 years. Once we open the doors to the government—and they must give a stamp and seal of approval — it is a dangerous road that many parents have concerns about.”

Rabbis from Agudah, along with Torah Umesorah, which represents hundreds of yeshivas and day schools, sent an open letter to the Dept. of Education, saying “as religious Jews, we seek above all else to raise our families in the traditions of our faith. We all stand as one! Our people have sacrificed so much over the millennia to preserve the institution of the yeshiva — the foundation of our faith.

“We cannot relinquish control of the yeshivas that are the essence of our people. We cannot surrender control of our curricula. We cannot abandon to others the selection of our teaching staff . . . Our people simply cannot abandon our religious values. With the help of G-d we will not permit it to happen,” the rabbi stated in their letter.

For its part, the NY Dept. of Education, which has been studying the oversight issue for several years, says it is not changing anything as non-public schools have always been required to provide “at least substantially equivalent to the instruction given to children of like age at the public school of the city or district in which such child resides.” It is a standard that dates back to the state’s 1894 Education Law, which required all children between the ages of six to 16 to attend school.

Schools opting for a local review option will be evaluated on several criteria, including whether:

‘Equivalency without a bureaucrat with a clipboard’

One of those who will be tasked with making those local reviews is Joel Petlin, the superintendent of the Kiryas Joel School District in Orange County, NY, home to a large community of Satmar chasidim.

An Orthodox Jew whose children attended yeshiva schools in Rockland County, Petlin said in a statement:

“We currently have 12 non-public school buildings located within the Kiryas Joel School District, serving over 8,600 students.”

He said, “a review of all the classrooms and curricula in those non-public schools will obviously be quite time consuming, but will hopefully be a productive way to evaluate their educational programs, and in some cases, be an opportunity to offer constructive methods to improve instruction, in culturally appropriate ways.”

If there is one “hopeful spot,” according to Weinstock, it is that “the state is listening to some of our concerns that a one-size-fits-all approach towards education will not work. If this rubric of state oversight must continue, I hope we can emerge at a place where equivalency can be demonstrated without the ‘bureaucrat with clipboard’ model.”

Feiner, who never graduated college and runs a business with an international clientele and staff of 23, pointed out that her son received an honors award based on his grades in secular studies from the state.

“Tell us where we are failing; we are not,” she said. “We are just doing it differently.”

Previous PostCraig Halper: lifelong learner Next PostBefore he was King, Charles was patron of Cracow’s JCC

One thought on “New York to oversee non-public schools”