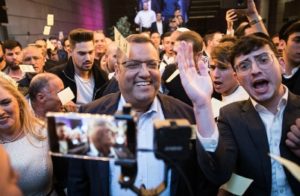 Moshe Leon, center, is headed for a Nov. 13 run-off for Jerusalem mayor.

It was a night filled with several surprises and drama as Israel’s municipal election results poured in overnight Tuesday, Oct. 30-Wednesday, Oct. 31.

For the first time, Israelis were given the day off to vote in municipal elections and voter turnout was up, even if by a few percent.

According to the Interior Ministry, 3.6 million people voted out of 6.6 million eligible voters in 251 cities, towns and local councils, representing an increase of about 5% since the last municipal elections five years ago.

With Berkovitch coming in second place, he will face-off with Leon for the mayoral seat in the run-off vote. The winner needs 40% to clinch victory in the capital.

In a historic win, Haifa named its first woman mayor, Einat Kalisch Rotem in a solid defeat against Mayor Yona Yahav, who had been entrenched as the city’s mayor for 15 years.

Kalisch Rotem garnered some 56% of the city vote, unseating Yahav, who received only 38%.

Drama between the two marred the day as both candidates accused each other of serious election meddling.

In Tel Aviv, residents decided that Mayor Ron Huldai was to remain in his position for the next five years, which means he will have led the city for a quarter a century once his new term of office is completed.

“We have many more things to do for the people of Tel Aviv,” Huldai said Wednesday morning. “I thank the residents of Tel Aviv for their trust and the great team. They did a wonderful job.”

With over 60% of the votes counted, Huldai garnered 46% of the vote and his opponent — and deputy mayor — Asaf Zamir received 35%.

In Nahariya, Jacky Sabag, who held office for the last 30 years, was unseated by Ronen Marley who won 62% to 23%.

Fuming from his humiliating loss, he told his constituency that “he had reached a conclusion” that they were a bunch “of ingrates.”

A close battle is raging in Beit Shemesh, with the votes of soldiers, prisoners and the disabled to be the decider.

There are only about 251 votes between independent religious-Zionist candidate Aliza Bloch and Shas-affiliated Mayor Moshe Abutbul.

However, soldiers’ votes had not yet been tallied and final results were expected Thursday, Nov. 1.

Another runoff will occur in Ramat Gan, where incumbent Yisrael Zinger will oppose former MK and former Israeli ambassador to UNESCO and the OECD Carmel Shama-Hacohen.

In yet another runoff, Ra’anana incumbent Eitan Ginzburg received fewer votes than opponent Chaim Broyde in the first round.

Meanwhile, in the South, the town of Yerucham also named its first woman mayor Tal Ohana.

JNS contributed to this report.