Neutralizing landmines in the Jordan Valley 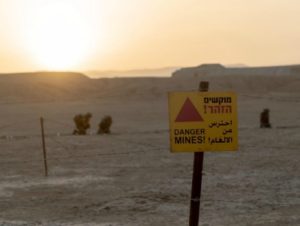 A sign warning of mines in the area of the Jordan Valley. (IDF Spokesperson Unit)

JERUSALEM — The Jordan Valley region is usually quiet, but its calm was shattered in May by the sounds of hundreds of landmines going off. Planted decades ago by Palestinian terrorists seeking to infiltrate Israel from Jordan in the 1960s and ’70s, and by the Israel Defense Forces seeking to stop them, the landmines are a relic from a time when Israel’s eastern border was far from peaceful.

The area was once known as “the land of pursuits,” due to the IDF’s routine chases of Palestinian armed cells infiltrating from the east.

Today, however, Israel’s longest border is far removed from those days of armed clashes, and the IDF is determined to demine the area, making it safe and secure for tourists.

Included among those tourists are Christian visitors who would like to see the seven historic monasteries in the region — structures that did not escape the violence of the last century, when Palestinian guerillas booby-trapped them with landmines.

“The idea is to allow civilians and tourists to enter the area and pray at the sites,” Maj. Amir Zargari, operational engineering officer of IDF Central Command, told JNS.

“During the times of the pursuits, lots of landmines were planted here.”

In a visit to the region in March, Israeli President Reuven Rivlin said that the mission to clear the mines is part of the Jewish state’s “deep commitment to religious freedom.”

“The ‘Land of the Monasteries’ is a place of prayer and holiness. A place of pilgrims from afar who come to be closer to G-d.

“But it is also a place that has been injured and broken by war in the past.

“We are now investing large amounts to restore the site and to return the monasteries to their churches so that Christian pilgrims and other people of faith from around the world can come and visit once again.”

At the start of May, combat engineering units neutralized no fewer than 900 landmines within just three days. Last year, the units detonated 650 mines, according to Zargari.

Combat engineering units, in coordination with Israel’s Defense Ministry, are working according to a multi-year program to demine the entire area. Around two years of work are left until the mission is accomplished.

This will “allow people to come, pray and enjoy the view. The area is very important to Christianity and Judaism,” said Zargari. “We are advancing well.”

The three days of detonation are only the last stage that follows months of preparations, the officer explained. “Before that, we prepare our battle procedures, preparations and simulations. We work according to drills.”

The preparations include conducing intensive scans and “making sure nothing was left behind.”

The last of these mines were planted in the area in 1974, said Zargari, creating significant challenges due to the extreme heat conditions in the area and natural corrosion.

“Terrorists booby-trapped the monasteries. Also, the IDF mined the area against the enemy,” he said, referring to Israeli minefields planted against the threat of armored formations invading from the east. “Today, we are clearing them.”

Asked if such an operation can help prepare the IDF’s engineering units for operations in more hostile territory, Zargari said yes,

““Our core is dealing with landmines and explosives.”

The technology available to the modern IDF mine-clearers is far advanced compared to what was available “when I was a young officer,” said Zargari.

“This very much upgrades our work and the end result.”

Most days, the combat engineering units conduct security operations and training, and are on-call to respond to incidents.

“This is not the only thing that any of the combat engineering units do in light of the challenges around,” said Zargari.

“And there is no shortage of challenges.”

‘Safeguarding the security stability of the eastern border’

The Jordan Valley is protected around the clock by the IDF’s 417 regional brigade. Maj. Oded Zahari, the brigade’s operations branch officer, defined the brigade’s central mission as “safeguarding the security stability of the eastern border, a peaceful border.”

There are still, however, unusual incidents, such as the attempt in February to smuggle handguns across the Jordanian-Israeli border. Security forces intercepted the smuggling and arrested a Palestinian resident of Nablus, as well as three others suspected of assisting him.

“The sector of the border with the Hashemite Kingdom is quiet. Our forces work around the clock to safeguard the situation as it is,” said Zahari. “We have unusual incidents, like any border. Such incidents receive the appropriate responses.”

The brigade consists of two light-infantry battalions, made up of male and female soldiers, who are almost permanently stationed in the area, as part of the IDF’s Border Defense Array.

The units also secure roads, communities and conduct preventative counter-terror operations, as well as deal with some instances of unorganized violence, like firebombing and rock-throwing.

Such incidents are lower in number than in areas of the West Bank.

“In the end, we want to create the highest quality of life for the population here,” said Zahari.

The Jordan border fence, like other fences around the State of Israel, has high-tech sensors installed on it, to alert forces to suspicious movements.

According to Zahari, regular cooperation with Jordanian security forces occurs, as part of the terms of the peace treaty.

“The coordination, which occurs through liaison officers, takes place between both countries to keep the quiet and maintain the security stability,” he said. “This is in the interests of both sides.”

“This is a beautiful area. It’s worthwhile visiting here. The agriculture is flourishing. The dates here are wonderful.

“I invite everyone to come, visit and see this wonder.”