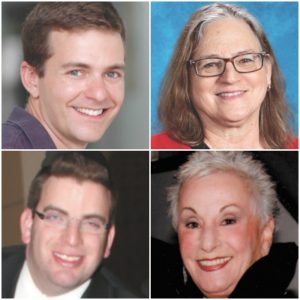 Every year the IJN salutes people  known or obscure  who bring freedom into our lives. Passover, with its message of gratitude to G-d for our freedom, is the appropriate moment to say thank you.

Sometimes finding just the right  reference, key person or critical nugget of information can prove frustrating and time-consuming — unless the voice on the other end of the phone or email is that of Linda Hamo. Need an expert on Rosh Chodesh? Need a time for an event? Need an update on a former student? Need a historical or Judaic fact? Linda Hamo of the Denver Academy of Torah has the appropriate answer every time. When in doubt, Linda Hamo is the go-to person for solutions that aren’t even part of her job responsibilities, which are office manager — and art teacher — and school nurse (K-8). Linda is simply a gracious, helpful and kind human being.

DAT parents, students, teachers, administrators,volunteers, suppliers and security personnel have known this since 2006.The person at the front desk of a school sets the tone for everything that goes on at the school. Linda Hamo sets the perfect tone.

Rare is the person who can bring all of her training and interests to a single position. But that’s what Linda Hamo has done. She earned a BA in history and Judaic studies from Smith College and The Hebrew University of Jerusalem, and she received a nursing assistant diploma at Denver’s Emily Griffith Technical College. All this finds its way into the daily routine of an unfailingly welcoming person in our community. Judaism speaks of the ba’alat middot, the exemplary ethical personality. We have a living example in Linda Hamo.

Rabbi Eliav Bock, director of Ramah Outdoor Adventure camp, blows into the IJN like an uncorked genie about to grant his first wish.

Thus the IJN introduced Rabbi Bock shortly before the opening of the outdoor adventure camp, Ramah in the Rockies, in 2010. As hundreds of campers now well know, Rabbi Bock has been uncorking a unique spiritual genie ever since,  the spirituality of the outdoors: sunsets, rafting, animals in the wild, rock climbing, each day begun with prayers and each week stopped for Shabbat. The world took note as Rabbi Bock was awarded the coveted Covenant Pomegranate Prize for Jewish education two years later.

What neither the camp insiders nor the wider world — nor even Rabbi Bock himself — could have known during the first seven seasons of the camp was the challenge he would face in its eighth. Last August, a fire broke out in the middle of the night. From the first flames until the last camper was safely resettled in a new camp location — all within 36 hours —Rabbi Bock, as the national head of Ramah camps put it, showed he “is exactly the kind of leader you want in a crisis. He combines intelligence and seriousness with a light way of dealing with people.”

Needless to say, the HEA, which provided temporary quarters in the middle of the night, and JCC, which offered its Ranch Camp for the remainder of the season, stepped up in exemplary fashion. That is the kind of loyalty and commitment Rabbi Bock inspires.

Is Shlomo Fried a committee? A community dictionary? When one lists the organizations, agencies, synagogue, projects, dinners and other events that Shlomo Fried takes a leadership position in, one may be forgiven for thinking that “Shlomo Fried” is much more than a single human being.

But here it is: For years now, virtually every activity at EDOS has Fried’s fingerprints on it. Beyond EDOS, countless dinners of Hillel Academy have listed him as chair. Tomchei Shabbos? Fried is not a “leader”; if ever there were a person who gets down to the details and makes certain a project turns out the way it is designed, it is Shlomo Fried. Purim carnivals? Concerts? Annual dinners? Guest speakers? Shabbatonim? Fundraising? Remodeling? Table-and-chair setup and dismantling? Gabbai? You name it, Shlomo Fried invests not only the brains but the sweat equity.

And this only includes his leadership that cannot be hidden. Behind the scenes, still another Shlomo Fried Committee unfolds. The thing is, he loves it all. No one is forcing him. He doesn’t really care whether he’s recognized for all his work. He just wants to make it happen.

You can’t bottle and sell the Shlomo Fried Committee. You can’t process the formula and make him available more widely. When it comes to love of community and desire to see it grow, the only formula that counts is love and flair. There is no patent on them. But Shlomo Fried owns them in spades.

Dr. Toby Mower and her husband Dr. Mort Mower collaborate on all things. Yet, through her sheer force of will, Toby Mower’s influence in the Jewish world, especially JNF, have made men take notice and follow her lead. So pardon us for shining the spotlight on her — but it’s the perfect moment.

Mower, who hails from Baltimore, first demonstrated her expertise and chutzpah as a nurse. Recipient of an MA in clinical counseling, she joined the board of the Recovery House for Addicted Jewish Men — but discovered there was no center for women. Mower put on her fighting gloves and made it happen. She spoke her mind despite cultural taboos. One didn’t say no to Toby!

JNF has been an integral part of Mower’s life since 1965. Now on national boards and task forces, she recalls when the Sapphire Society approached the JNF board about building a small town in the Negev. “The board said, ‘These crazy women want to build something in the desert!’”  Three years later, the board decided to build up the Negev. “It took the women to show them the way,” Mower says. This is only one major JNF project seeded at Mower’s insistence.

Toby Mower — the petite lioness who consistently struggles for women’s respect in a man’s world — has contributed to the renaissance of female empowerment. But it doesn’t end there. She enjoys and shares the vast Mower art collection  — from Renoir to Picasso — striving to enrich all of humanity, because it’s right.

Previous PostThey have stolen Pesach from us! Next PostIn Holland, they love matzah all year long