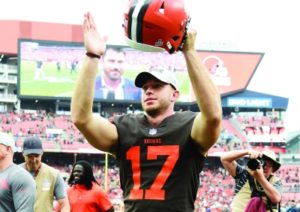 CLEVELAND — Browns rookie kicker Greg Joseph said it’s been a “wild ride” for him since being cut at the end of preseason by the Miami Dolphins, signing with Cleveland in Week 3 of the regular season, and just days later, playing an integral role in the NFL team’s first victory in nearly two years.

Joseph, 24, was born in Johannesburg, South Africa, and moved to Florida with his family in 2001.

He graduated in 2017 from Florida Atlantic University in Boca Raton as the Owls’ all-time leader in field goals made, points scored, PATs (point-after-touchdown) made and field goals attempted.

He also holds the university’s single-game records for PATs, field goals, points scored by kicking and holds the record for the Owls’ longest field goal.

He went undrafted but soon signed with the Dolphins and was in a training camp battle with fellow rookie Jason Sanders, a seventh-round pick, to be the team’s kicker.

In three preseason games with the Dolphins, Joseph was 3-for-3 on field goals, including a 54-yard kick. Unfortunately for him, Miami decided to go with Sanders.

After being released, Joseph stayed ready and stuck to his practice routine. Despite being cut by a team far closer to where he grew up and joining a team in a city he visited for the first time during a tryout, Joseph couldn’t be happier than to be in Cleveland.

“After I got released from Miami, [the Browns] were the first one to get in touch with me,” Joseph said. “It’s still an awesome feeling. It’s good to feel wanted, especially in this business.

“Everything happens for a reason. I had a blast in Miami. I learned a lot about myself in Miami. I learned how to be a better athlete, a better man, just a better person overall. They do a great job with their personal engagement program over there. And fortunately, I got the call to come over here.”

The Browns signed Joseph Sept. 17, a Monday, after which he had to prepare for a prime-time Thursday night game Sept. 20 against the New York Jets. He didn’t complain about the lack of time to prepare.

“It’s almost better to have a quick turnaround like that because you don’t have time to think about anything,” he said.

Since then, the Dolphins’ loss has been the Browns’ gain.

Joseph is 8-for-9 on field goal attempts in four games with the Browns, his only miss coming on a 55-yard attempt against the Ravens at the end of regulation. He also missed a PAT in that game.

His longest made field goal with the Browns was a 45-yard attempt against the Jets.

His impressions of Cleveland are thus far almost universally positive.

“I don’t know why everyone has such a negative connotation about [Cleveland],” Joseph said. “The weather’s been awesome and the people are nice.”

“I’ll take each challenge as it comes,” he said.

“Right now, the weather is good. I’ll have to look into it further when [the bad weather comes]. I’ll get in touch with people who have kicked here and experienced it. But then again, you can only learn so much from them, you have to go through it firsthand to really impact your learning curve.”

He hasn’t set any personal performance goals for the season beyond trying to get better every day and have fun while doing it.

“My main goal is to put the team in a better position no matter what through my kicking,” he said. “I am the guy who will sacrifice a couple stats — I don’t look into them. I just want the team to win at the end of the day. I will do whatever it takes to help put my team in the best position to win each and every game.”

Joseph said the Browns players and staff have been “extremely welcoming.”

“It’s been fun,” he said. “The Browns are a top-notch organization. They take care of you every way they can, and they’ve been awesome in my transition — having a couple hours to get up [to Cleveland] and helping me find a place to live and sorting me out for life overall.

“They’ve helped me out immensely as far as teaching me the ropes because I’m a rookie. They’re both vets. They’re both kind of ‘jokester’ guys — they keep the mood light and we have fun.

“Really, at the end of the day, that’s what it’s about. Football is a game. It’s amazing and it’s fun and it’s awesome how many followers we get and how we can positively impact Cleveland as a whole, but you gotta have fun doing it. Otherwise, it becomes overbearing, and you have to make the most of the opportunity you’re presented.”

Joseph said he wants to continue to further acquaint himself with Northeast Ohio’s Jewish community and give back as much as he can.

“It’s a virtue close to my heart, since my mom kind of instilled that in me from a young age,” he said. “That’s why I’m leaning toward going out and talking with some Jewish day schools and hopefully something with the Jewish Federation, which would be very cool. That’s in the works, hopefully.”

He said his faith has “absolutely” guided him during his life and career.

“That’s why I go about my business with a smile on my face because I look at every experience as a learning experience. I believe there’s a plan. What’s written is written, you just go by that. That’s why I never take anything too heavily. I choose to live my life in a positive manner, with a smile on my face, positively impacting the people around me, which is definitely a goal of mine.”

He noted the Browns normally get an off day on Tuesdays — days he hopes he can use to give back.

“Every Tuesday, there are community service events,” Joseph said.

“I just told our community relations people to sign me up for every one. I’ll be there, it’s something that’s important to me. I want to reach out and use this platform while it’s here to help whoever I can help and positively impact the greatest amount of people’s quality of lives that I can possibly impact. Football is a great platform for that, and I feel like I’d be wasting it if I’m not using it. That’s my goal here, to get out and help people.”

Joseph wants Clevelanders to know he plans to do his best on the field, but he’s here for more than football.

“The Browns are in a position to win, but while I’m here, I want to get involved in the community,” he said.

“I want to try to go talk to and inspire Jewish kids all across Cleveland to let them know that it’s possible to do basically whatever you want. It’s not just football, it’s not just sports. If you have a goal, my big thing is, put your head down and work. Anything is possible.”

Previous PostIs Harvard capping Asian students as it once did Jews? Next PostSAR Academy roiled by probe of prolonged abuse