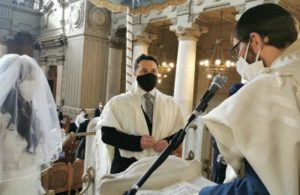 ROME — Italian Jews celebrated their community’s first wedding since the country’s synagogues, along with many other institutions, were shut down due to the coronavirus.

Marco Del Monte, a Rome-born chef who is studying for a master’s degree in psychology, married Elinor Hanoka, a sixth-year medical student from Israel, on Sunday, June 7, while wearing face masks at the Great Synagogue of Rome.

The couple had planned to marry in Jerusalem in March, but Italy and Israel went into lockdown.

The bride’s parents were unable to attend, wrote Dror Eydar, Israel’s ambassador to Italy, on Facebook. Eydar has known the groom for several years. His parents were able to attend, along with a handful of guests and Rabbi Menachem Lazar of Rome’s Chabad Piazza Bologna synagogue, who officiated.

“Great joy, albeit not in the cities of Judea and in the streets of Jerusalem, as had been planned, but in Rome,” Eydar wrote on Facebook, paraphrasing from the text of Sheva Brachot — seven blessings that are recited during Jewish weddings.

“Italy in general and Rome’s Jewish community are still healing from their wounds, let’s hope this joy heralds many more,” he added.

Italy, where more than 34,000 people have died of the virus, was the site of its first major outbreak in Europe. At least a dozen of the country’s 40,000 Jews also died. Italy emerged from lockdown about three weeks ago.

Previous PostWho and what are the Boogaloos? Next PostJewish day school teacher wins big on ‘Jeopardy’