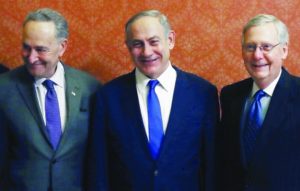 So says a new poll by the Pew Research Center. But experts are divided on what it means, and whether pro-Israel activists — and Democrats — should be worried.

Do the results indicate that Democrats are abandoning Israel en masse? Is it another sign of political polarization, which makes it harder for one party to support an issue associated with the other?

Or, as some analysts suggest, was it a badly worded question?

The Pew poll, released Jan. 23, shows that partisan polarization around the Israeli-Palestinian conflict is starker than ever in the US.

While 79% of Republicans sympathize more with Israel than with the Palestinians, that number is only 27% for Democrats.

Since 2001, the share of Republicans who sympathize with Israel has increased 29 percentage points, from 50% to 79%, says Pew.

Over the same period, the share of Democrats sympathizing more with Israel has declined 11 points, from 38% to 27%.

As recently as two years ago, 43% of Democrats sympathized more with Israel.

The drop for Israel this year is especially steep among liberal Democrats: 35% said they sympathized more with the Palestinians — nearly double the 19% who sympathize more with Israel.

The worriers see this as another crack in the bipartisan support that Israel has long enjoyed in the US.

The trend, according to one theory, was exacerbated by eight years of feuding between President Barack Obama and Israeli Prime Minister Benjamin Netanyahu, which, according to whom you ask, showed either that Democrats couldn’t be trusted on Israel or that Netanyahu stumbled in associating Israel so closely with the Republican side.

It continues with the current love fest between Netanyahu and President Donald Trump, who had a typically warm meeting last week in Davos, Switzerland.

A solidly right-wing government in Jerusalem, another theory goes, makes it harder for liberal Democrats to warm up to a country they once solidly supported.

With an increasingly diverse coalition underpinning the Democrats’ base, Israel needs to make its case as a liberal and open society, said Jason Isaacson, the American Jewish Committee’s associate executive director for policy.

That has become harder, he said, as the peace process has frozen and the government in Israel has shifted further to the right.

“It’s a reminder that it’s essential for Israel and friends of Israel to make the case for Israel’s openness and liberalism and devotion to justice and yearning for peace,” Isaacson said.

“I recognize that the messages of a government [in Israel] can have an effect on how that message takes hold on particular constituencies in the US.”

Republican Jewish activists, meanwhile, are saying the poll proves what they’ve long asserted: that Republicans are the only party that’s truly pro-Israel.

Republicans have celebrated Trump’s opposition to the Iran nuclear agreement — brokered by Obama and reviled by Netanyahu — as well as his recognition of Jerusalem as Israel’s capital.

Trump and Vice President Mike Pence both enjoyed the warmest of welcomes on their trips to Israel.

“Support for Israel is strong and growing in the Republican Party, while it is declining among Democrats,” Republican Jewish Coalition President Matt Brooks said in a statement.

“We saw the Democrats’ views on Israel implemented by the Obama administration, which put ‘daylight’ between the US and our chief ally, Israel, while pursuing a disastrous Middle East policy.”

Previous administrations also sought to be “honest brokers” in the Middle East, and Democrats like to argue that under Obama the level of US funding and cooperation provided to Israel was unprecedented.

But Republicans assert that the Iran deal was a disaster for Israel and that Obama’s pressure on Netanyahu was relentless, culminating in his decision, in the last days of his presidency, to allow the UN Security Council to adopt a resolution condemning Israeli settlement construction.

Other experts say shifting sympathies in the conflict are a symptom of political polarization, not of Democratic opposition to Israel. Democrats “are increasingly conflating their feelings about Israel with their feelings about Trump, associating Israel with the American president,” wrote Michael Kaplow, the policy director of the Israel Policy Forum, in the Forward.

Trump has cast himself as vociferously pro-Israel, so for some Democrats, coldness toward Israel is one more way to protest a president whose policies they abhor, says Rabbi Jack Moline, former president of the National Jewish Democratic Council.

Pew’s polling has shown increasing polarization overall between Americans of the two parties.

A December poll found 86% of Americans feel there is strong or very strong conflict between Republicans and Democrats, and the share of Democrats and Republicans who have very unfavorable opinions of the other party has doubled since the 1990s.

“I think this is not a sudden surge of sympathy for Palestinians,” Moline said.

“I think that’s always been there. I don’t think it’s an abandonment of Israel by anybody. I think that what this is is one of the pieces of fallout from the very ugly divisiveness on all matters in this country.”

Recent polls show that a vast majority of Americans do support Israel. According to a February, 2017 Gallup poll, 71% of Americans view Israel favorably, a number that has stayed relatively constant for the past 15 years.

The differences in the Gallup poll among Republicans (81%), Independents (70) and Democrats (61) aren’t as dramatic as the Pew poll.

Resolutions and legislation favoring Israel routinely pass Congress and the Senate with little to no opposition.

A vote recognizing Jerusalem as Israel’s undivided capital passed the Senate 90-0, months before Trump issued his own recognition.

Among the 18 states that have passed laws against the boycott Israel movement, half are blue states, half are red.

“There remains broad, bipartisan support in Congress for the US-Israel relationship, because strengthening that relationship serves American interests,” Marshall Wittman, the spokesman for AIPAC, wrote JTA in an email.

“That support is demonstrated regularly in consistent, bipartisan votes on pro-Israel initiatives.”

Wittman’s predecessor, Josh Block, told JTA that support for Israel remains robust among Democrats, and that anti-Israel feeling represents a group that is still on the party’s extreme.

He noted numbers from the same Pew poll showing that support for Israel is still high across ethnic groups and religious denominations.

“There’s been a legitimate effort of people on the far fringe of the Democratic party . . . to poison and undermine the legitimacy of Jewish pride and support for Israel,” Block, now the CEO of the Israel Project, told JTA.

“I don’t think this poll tells you anything useful about American support for Israel,” said Tamara Cofman Wittes, a senior fellow in the Center for Middle East Policy at the Brookings Institution.

She said the poll question encourages respondents to make a binary choice whether they sympathize with the Israelis or the Palestinians.

A poll conducted by the University of Maryland found that 59% of Americans don’t want the government to favor either Israelis or Palestinians.

Pew’s question “pushes the answers to be more polarized than they may in fact be,” Wittes said of the Pew survey.

“One should not take away from this public opinion data the conclusion that there are whole segments of Americans that are getting more hostile to Israel, and I should write them off.”

Still, there are unmistakable signs that there are more Democrats willing to criticize Israel, especially its current government, than Republicans. In both 2012 and 2016, Democrats faced pressure from pro-Palestinian delegates to alter their party platform’s planks on Israel. In 2012, boilerplate references to Jerusalem as Israel’s capital were dropped from the platform but later restored.

In 2016, the party altered its platform to reflect Palestinian aspirations but rejected language calling for Israel to end its occupation of the West Bank and settlement activity.

James Zogby, who was the chair of the Democratic National Committee’s Resolutions Committee, was among those who wanted to add language about Israel’s occupation to the 2016 party platform.

Zogby, the founder of the Arab American Institute, told JTA that the Pew results show that Democrats are growing tired of Israeli actions in the West Bank and resent the mutual admiration between Trump and Netanyahu.

Zogby also says Democrats are upset about Netanyahu’s past efforts to undermine Obama’s Iran nuclear deal — including a 2015 speech to Congress he delivered at the invitation of its Republican opponents.

“This is largely the result of really bad Israeli policy, and an embrace by a president who also has a really negative agenda,” he said.

Wittes and others also noted that this poll isn’t good news for Republican supporters of Israel, either. Pro-Israel activists have long emphasized that defending Israel is a bipartisan priority. If that support does erode among Democrats, it could hurt Israel even if Republicans continue to support the Jewish state.

“Every member of Congress who supports Israel is a good thing,” said Jennifer Rubin, a columnist for the Washington Post who self-identifies as center-right and has been very critical of Trump.

“My conclusion is that [support for Israel] has become way too imbalanced. The challenge is to remove this from the partisan dynamic that is so fierce right now.”