Home Features Deathbed confessions: ‘I’m Jewish, and so are you’

Deathbed confessions: ‘I’m Jewish, and so are you’ 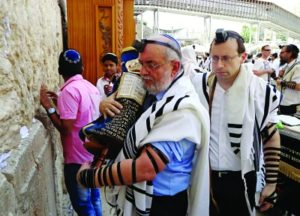 Mariusz Robert Opalko, holding a Torah scroll, and Michael Freund at the Western Wall in Jerusalem, Israel on June 9, 2013. (Courtesy of Shavei Israel)

BRUSSELS — In a few months, Simone Azoubel will realize a lifelong dream and move to Israel with her husband.

A 56-year-old Jewish woman from Recife in northern Brazil, Azoubel is brushing up on her Israeli slang as she prepares for her aliyah, the Hebrew word for immigration by Jews to Israel.

The preparations are hectic, but Azoubel finds time to reflect on how much of her identify and life trajectory she owes to her grandmother — namely, the older woman’s deathbed revelation of her own Jewish ancestry.

“My maternal grandmother, Raquel, told me she wanted to be buried with her people instead of near her non-Jewish husband, and that she wanted no flowers on the headstone,” said Azoubel, recalling the exchange from 1999.

The unusual request put Simone, raised a Christian, on a path of connecting to Judaism, and led her and several other family members to become members of Recife’s dwindling Jewish community.

This deathbed embrace of Judaism by Raquel, a descendant of Sephardic Jews who had fled the Spanish Inquisition to Turkey and later moved to Brazil, is not unique. And events like it have shaped what it means to be Jewish for countless people in places where identifying as Jewish used to be dangerous.

Dutch Chief Rabbi Binyomin Jacobs, an educator and mental health counselor, said he has spoken to multiple Holocaust survivors who revealed their Jewish origins as they approached their last days.

For some of those who are on their deathbeds, the need to reconnect to Judaism is internal, driven by their own sense of belonging.

“Nearing death makes a person focus on what’s really important to them, which is often their identity,” Jacobs said.

Whereas dying is “frightening to a lot of people, at the same time it’s also a release from other fears, of things that can no longer hurt them,” he said.

One Dutch Holocaust survivor who passed away in 2014 added “Cohen” to his last name shortly before he died. It was a bombshell for his non-Jewish wife and children, Jacobs said. He told Jacobs he had kept his Jewish identity hidden for years to protect them.

For others offering deathbed confessions about their Jewishness, the motivation is rooted in a desire to relieve themselves from the burden of carrying a secret, or guide descendants back into Judaism’s fold.

Mariusz Robert Opalko, a 70-year-old lawyer from Cracow, Poland, is also a Cohen, a descendant of the priestly caste, though he discovered it only 20 years ago.

In 1999, in the hospital just days before her own death, his mother Halina told him that she and his father were both Holocaust survivors whose families were nearly wiped out. She revealed that his father is a Cohen and that their real last name is Lederman.

In an interview for the Israeli newspaper Makor Rishon, Opalko recalled her words: “I’m Jewish and so are you. If you want to be Jewish, be Jewish. If you don’t, then don’t. Being a Jew in Poland is very difficult.”

She told her brother, also a survivor, to tell Mariusz the truth if she died before she got a chance to do so.

The discovery had such a profound effect on Opako that he began practicing Judaism. In 2013, Shavei Israel, the Jerusalem-based organization devoted to help Jews like Opalko back into the fold, organized a belated Bar Mitzvah for Opalko in Jerusalem, at the Western Wall.

“First she asked me to sit down, then she told me who I am,” he recalled, drying his tears of excitement, in a video interview for Shavei Israel after the ceremony. Opako attended a course on Judaism organized by Shavei Israel.

What’s left of Polish Jewry may be thriving today, although Jews there suffered persecution there even after the Holocaust, under the communist regime. Mariusz’s father was fired from his job in 1956, perhaps because he was known to be Jewish.

Only after Halina’s confession did Mariusz — who has taken the Jewish name of Moshe — begin putting together various pieces from his family’s story.

He recalled that when he was a child, two uncles visited their home each year in December and spoke German with his parents over a candlelight dinner. Only in retrospect did he realize the visits were underground Chanukah celebrations and the language spoken was Yiddish.

But what Mariusz’s mother told him next was an even more astonishing discovery: His wife, Maria, was also Jewish and also unaware of her origins, Halina said. Maria, who passed away in 2003, confirmed this with her own family immediately after Mariusz told her of his mother’s revelation. They had a son, Radek, who was circumcised when he was 25 following the discovery that he is Jewish.

“I’m very emotional,” Opalko said at his Bar Mitzvah ceremony, which was also his first visit to Israel, “because of how all their lives my parents were too afraid to tell me who they were.”

When the revelation comes near death, it is often because the revealer “does not want to be the last link to Judaism,” said Michael Freund, Shavei Israel’s founder.

Last words can serve as a sort of last will and testament, and can cause profound change in the lives of the descendants of the deceased, said Freund.

His group has worked with dozens of people, most of them in Eastern Europe, who learned of their Judaism from a dying parent or grandparent.

Still, Freund has seen numerous cases in which only some descendants are moved in any discernible way by deathbed revelations, whereas “their siblings remained indifferent,” he said.

To Freund, this underscores how the deathbed revelation is for descendants only the beginning of a journey whose trajectory depends on individual circumstances — including how other Jews react to the discovery.

“Even after the Holocaust and decades of communist repression, the Jewish spark refuses to die,” Freund said. “Sharing such discoveries and coming out to the world can be intimidating in a time when anti-Semitism is rising. It’s our job to reach out and extend a helping hand.”