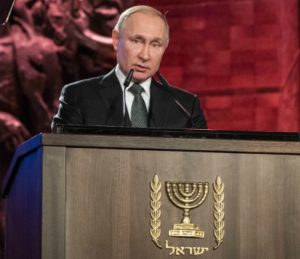 JERUSALEM — On one level, the recent event commemorating the 75th anniversary of the liberation of Auschwitz at Israel’s Yad Vashem Holocaust museum was a tour de force.

Dozens of world leaders traveled to Jerusalem for the event — among them Vice President Mike Pence, French President Emmanuel Macron and Russian President Vladimir Putin — and many spoke about the need to forever stand against anti-Semitism around the world.

The host, Israeli President Reuven Rivlin, called it a “historic occasion not only for Israel, but for humanity.”

The main grievance involves maps of Europe shown in a four-minute video about anti-Semitism.

Critics say the maps omitted how the Soviet Union and Germany carved up Poland and cooperated in their occupation of Poland from 1939 to 1941.

That Russian-German cooperation collapsed when Germany suddenly invaded Russia, and the Russian government has long sought to downplay its significance while highlighting what Moscow sees as the Russian people’s heroic battle to crush Nazism.

Last week, Yad Vashem apologized for the inaccurate maps, but the museum did not offer insight into how they were created or reply to claims of politicization.

On Sunday, Feb. 9, the museum did respond more fully to the allegations, denying them categorically.

The Jerusalem event was funded by the World Holocaust Forum Foundation, which is run by Moshe Kantor, a Russian billionaire who is also president of the European Jewish Congress. Kantor has faced allegations for years of being a Putin stooge — something that Kantor and his media team have dismissed as gossip tinged with racism.

What is known about Kantor’s ties to Russia is that he heads the multinational agrochemicals giant Acron Group, which is based in Russia, a country where openly criticizing or defying Putin can be ruinous.

Kantor is that country’s 27th richest person with a fortune of $3.8 billion, according to Forbes.

Kantor was included on a list of 96 so-called oligarchs — tycoons who got rich soon after the collapse of the former Soviet Union — drawn up in 2018 by the US Treasury Department in what it said was “determined by their closeness to the Russian regime.” But the list lost its credibility when it emerged that it had actually been lifted from the Forbes 2017 list of billionaires.

In a Haaretz op-ed, reporter Ofer Aderet called on Yad Vashem to “clarify to the public the nature of the ties between the Putin associate, who funded the event, and its content that served the Russian narrative.”

Shimon Erlich, a Holocaust survivor and scholar emeritus at Israel’s Ben-Gurion University, wrote in a Feb. 6 letter to Haaretz:

“I am shamed by how [Israeli Prime Minister] Benjamin Netanyahu and Moshe Kantor are influencing Yad Vashem, which is resembling counterparts in post-communist Eastern European that align their positions and views with governments that dictate historical narrative.”

On Feb. 8, Havi Dreifuss, the director of Yad Vashem’s Center for Research on the Holocaust in Poland, penned a Haaretz op-ed titled “Not in the name of the historians at Yad Vashem,” claiming that the inaccurate maps “were not random.”

“For a prominent, mediatized moment — and thanks to a mendacious visual display — the biased Russian narrative beat not only the Polish one (which is also distorted) but also historical research,” she wrote.

Deborah Lipstadt, a prominent Holocaust scholar from Emory University, told the Times of Israel last week that she was “absolutely heartbroken that Yad Vashem, which has such a stellar reputation and stayed above the political fray, should have become part of this politicization of history.”

In its denial Sunday of the politicization charges, Yad Vashem assumed full editorial responsibility for the videos, which it said were the result of an unintended oversight in a document whose focus was anti-Semitism, not WW II geopolitics.

“There were no external attempts to influence or exert pressure on Yad Vashem — either by the partners to the 23 January event or by politically motivated entities or persons — to manipulate in any way the historical facts or narratives presented during the event,” Yad Vashem spokesman Simmy Allen said.

“Additionally, we reject the premise that the event was tainted by pro-Soviet propaganda. It should be noted that Yad Vashem historians and scholars were directly involved in the content conveyed during the World Holocaust Forum. Nonetheless, regrettably there were a few historical inaccuracies in a video clip shown at the Fifth World Holocaust Forum.”

Two researchers, both department heads at Yad Vashem, had worked on the videos and other elements of the event for nine months, several people involved in the project told JTA.

The Russian state line was on full display at the event during Putin’s speech. The Russian president said that 40% of the Jews who died during the Holocaust were Soviet citizens — a claim that historians dismissed as absurd — and brought up Nazi collaboration that took place in Latvia and Lithuania, two countries that have tense relationships with Russia.

Polish President Andrzej Duda had pulled out of the event because he wasn’t invited to speak. Lithuania’s president, Gitanas Nauseda, also pulled out in solidarity with Poland.

“For years, the organizer of this Forum has been making attempts to create it as an alternative commemorative event,” the director of the Auschwitz-Birkenau State Museum, Piotr Cywinski, told the Times of Israel last month.

“It is simply so provocative and immature that I do not find the words to comment on it.”

Cywinski said that five years ago, Kantor tried to invite heads of states to Theresienstadt at the same time as the annual Auschwitz commemoration.

A spokesperson for Kantor denied that the Theresienstadt event and the one in Jerusalem were designed to upstage the Auschwitz ceremony.

“The Auschwitz event has its focus, the World Holocaust Forum has its own, which is much more focused on acting against anti-Semitism now,” the spokesperson said.