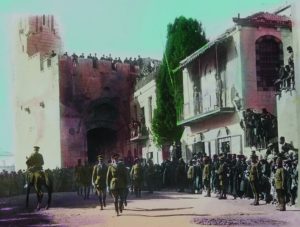 It happened 100 years ago. On Dec. 11, 1917 the soldiers of the British Imperial Army, led by General Edmund Allenby, entered Jerusalem, announcing the final collapse of the Ottoman Empire and ushering in a new era for the Holy City.

On Dec. 11, 2017, the Tower of David museum at Jaffa Gate unveiled a new exhibition, “A General and A Gentleman: Allenby at the Gates of Jerusalem,” to mark the centenary of the historic event.

Artifacts include the original white flag of surrender presented to the British by surrendering Turkish forces, the keys to the city of Jerusalem, correspondence between Allenby and his mother and travel journals, as well as personal equipment of the soldiers sourced from museums in New Zealand and the UK.

The Old City also marked the centenary with a street fair and a re-enactment of Allenby’s entry into the city, led by Viscount Henry J. H. Allenby of Megiddo and Felixstowe, accompanied by his mother Sara Viscountess Allenby, whose husband was the great-nephew of the Field Marshall.

“I feel enormously proud of the role that my great-grandfather played in the history of Jerusalem,” said Benson.

“Coming here has been more emotional than I was expecting. I’m impressed by the city and by its history and proud that in some small way our family has been part of that.”

say that in addition to bringing down the curtain on the Ottoman Empire, Allenby’s entry into the city was notable because the general insisted on walking through Jaffa Gate, an unusual move since leaders at the time often preferred to demonstrate their superiority by entering Jerusalem on horseback. By entering the city by foot, Allenby showed his respect for the status of Jerusalem as a holy city, important to the three Abrahamic religions Judaism, Christianity and Islam.

For that reason, the British proclamation encouraging the city’s residents to continue living their lives as usual and to freely observe their religious practices and ethnic traditions, was written in seven languages, among them Hebrew — the first time in modern history that Hebrew received international recognition.