For many Britons, Boris Johnson’s tenure as prime minister will have been defined by scandals like the one that forced him earlier this month to announce his intent to resign. 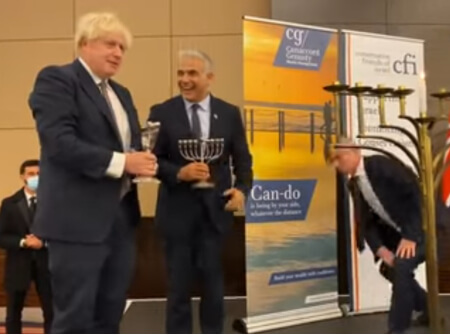 For Jewish Britons, the memories might well include a broken menorah — and not necessarily too much else. While his leadership may have had little lasting effect on the status of Britain’s nearly 300,000 Jews, here are some of his more memorable Jewish moments since he came into power in 2019.

1. A rare visit to the Belfast synagogue

During a coalition-building visit in June to the offshore British territory, Johnson, who is a key promoter of the UK’s departure from the European Union, visited the Belfast synagogue and vowed to sort out the kosher market problems that Brexit helped create. The issue has not been resolved as of yet, but its acknowledgment was an unusual recognition of the plight of a small minority by a politician who has sought to minimize Brexit’s negative effects.

During a Chanukah reception in London last year, Johnson enthusiastically waved around a delicate menorah that he had just been given as a token of the appreciation of the Conservative Friends of Israel group.

The object’s candle holders went flying across the room. Johnson, true to his bumbling public image, looked sheepish while the menorah was reassembled. Yair Lapid, who was then Israel’s foreign minister, laughed at the situation, at Johnson, or both. “I guess you’re not supposed to wave a menorah about,” Johnson was heard mumbling.

In a 2021 video greeting for Passover, Johnson, whose maternal great-grandfather, Elias Avery Lowe, was a Moscow-born Jew, demonstrated some deep familiarity with Jewish customs and even used a Yiddish word, kvetch (whine) to refer to some of what goes on when Jewish families sit around seder table.

4. A shift on Israel and the UN

As foreign secretary, Johnson spoke out pointedly against what he described as anti-Israel bias at United Nations forums. He also shifted the position of the UK on items dedicated to criticizing Israel alone, moving it from “yes” to abstention and finally to a “no.”

In 2021, he went one step further and stated that the UK was opposed to the Palestinian bid for an investigation into alleged war crimes by Israel.

“This investigation gives the impression of being a partial and prejudicial attack on a friend and ally of the UK,” he said.

His position furthered the reversal started by his predecessor May, which ended decades of the Foreign Office’s endorsement of resolutions and initiatives hostile to Israel.

His predecessors often spoke at events featuring Holocaust survivors and commemoration activists, but Johnson last year organized an hour-long video call with a survivor and a death camp liberator in which his role was to listen.

Johnson sat on the edge of his seat as he heard the stories of Auschwitz survivor Renee Salt and a Bergen-Belsen liberator Ian Forsyth.

As he interviewed the two elderly speakers, he stopped to inquire about certain details (“You must have been 14 by then?” he asked Salt) and told the two that what they had told him was “one of the most powerful things I’ve ever heard.”