Not dissimilar to Colorado, Israeli summers are hot all over. So, if you’re planning on hiking, a shady forest or a wild river stream might be your most comfortable options. 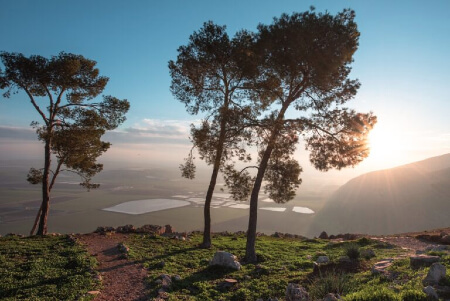 The best place for both is in Israel’s mountainous north. Here are seven of the best hikes there.

There are two waterfalls in this lovely Golan Heights trek. Families with kids can take the short walk to the Black Waterfall, a beautiful pool in a canyon made of black rock.

Beware: there is a section that requires climbing down a series of handholds drilled into the rock.

If you continue further, you’ll reach the White Waterfall, which is not as serene as its black counterpart but has a bigger pool. The walk features a winding stream, wide-open fields and incredible views.

This is best done with two cars so you don’t have to double back (it’s nearly seven kilometers in each direction). Nahal El Al is a national park but there’s no entrance fee.

You’ll find all of the seven species of plants mentioned in the Hebrew Bible on this walk, including pomegranates, grapes and figs.

Another beautiful nature reserve in the Golan, the Majrase, located in the Beitha Nature Reserve, features waist-high water to wade through, but hikers who prefer not to get their boots or body wet can follow alongside on the stroller-friendly path, set among bamboo, reeds and tall trees.

This is a short trail — only a kilometer long (.62 mile) — but since it’s a national park, don’t forget to make a reservation before you arrive.

In biblical times, Dan was Israel’s northernmost region. Now it boasts the Tel Dan Nature Reserve where you can hike through ancient history, splash in a rushing river and enjoy the lush greenery.

There are waterfalls and wading pools and, for history buffs, the “tel” from which the area gets its name — an archaeological excavation of the ancient city plus a pretty flour mill from the British Mandate period.

The hike is two kilometres (1.24 miles) long, but if you like water, you’ll spend much more time than the short distance suggests. Be aware that the Dan’s water comes from melting snow on the Golan Heights, so it can be frigid, even in the summer. There are two trails — the long one just described, and a shorter loop that’s wheelchair-accessible.

North of Katzrin is the Jilaboun Stream, marked by some impressive vertical rock walls, pools and waterfalls.

The way into the canyon passes through Kfar Devora, where a Talmudic-era lintel was found.

The 39-foot Devora Waterfall can be found just after the village (there are handholds drilled into the rocks to get down to it).

Hike through the streambed for about a mile until you reach the 134-foot Jilaboun Waterfall. At the end of the hike there’s the “Officer’s Pool” (a concrete swimming pool used by the Syrians until 1967).

What’s cooler than a hike along a wet and wild stream? A stream with a castle as a reward! This is a long trail — at least 10 kilometers (6.2 miles) depending on how you hike it — and starts near the village of Mitzpeh Hila.

You’ll pass through a “cave tunnel” before you arrive at Montfort, the ruins of a castle dating back to the Crusader era. Don’t miss the views from the top. Then continue on the red trail toward Nahal Kziv, where the thick tree canopy keeps things comfortable even in the height of the summer.

You’ll pass pools of fish and little waterfalls. Return on the black trail but get ready — it’s a steep climb back to the parking lot. You can stay out of the water while hiking or bring water shoes for a refreshing dip.

The Hula was originally a lake that was drained by the Zionist pioneers to eradicate the area of malaria-carrying mosquitos. It has since been restored to its original watery self. That’s been a boon for the thousands of migrating birds who visit every winter; the Agamon Hula Park is one of the top 10 birdwatching locations in the world.

The birds — including magnificent cranes and pelicans — attract thousands of visitors every winter.

The path around the lake is 8.5 kilometers (5.3 miles) and you can walk, cycle or rent a motorized golf cart.

There are observation points scattered throughout. You’ll spot turtles, beavers and water buffalo. Don’t forget to make a reservation.

The Gilboa rises some 500 meters (1,640 feet) above the plains of the Jezreel Valley for fantastic views of the Sea of Galilee to the east and Haifa to the west. Mount Gilboa was the setting of a fierce battle between the Philistines and the Israelites led by King Saul, who fell on his sword to avoid being captured by the enemy.

There are two short loop trails of one and two kilometers (.62-1.24 miles). The first runs along the edge of the cliff; the second goes down along the ridge. You’ll be treated to gorgeous irises in the spring; the views are spectacular at any time of year.

For the more ambitious, start at Emek HaMayanot (Valley of Springs), climb to the top and back down again. The 15-kilometer (9.3-mile) round-trip includes ascents with ladders.