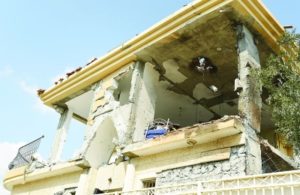 Sirens blared across southern Israel just before 3:40 a.m. (local time) as two rockets, including a long-range missile, were fired at Israel.

One of the rockets directly hit and destroyed a home in the southern city of Beersheba. No injuries were reported as the family — a mother and three children — had made it to the bomb shelter just before the rocket struck the home.

Following the rocket attacks, the Israel Air Force struck at least five “terror targets” across the Gaza Strip including Khan Younis and Rafah.

Palestinian media reported that at least three people were injured in the air strikes. Neither Hamas or Islamic Jihad have claimed responsibility for the rocket attacks.

The rocket attacks come amidst Egyptian mediated efforts to achieve a long-term ceasefire after months of unrest on the Gaza border including sporadic rocket fire, continuous kite terror and incendiary balloon launches, as well as riots since late March.

The IDF has warned that it will hold Hamas and Palestinian Islamic Jihad accountable for the Wednesday’s rocket attacks, despite both Gaza factions denying they had been involved.

In a statement, the IDF said “the rocket types fired tonight belong only to two organizations in the Gaza Strip — Hamas and the Palestinian Islamic Jihad.”

“Hamas is responsible for all that is carried out in the Gaza Strip and it will bear the consequences. There is a direct connection between the atmosphere of violence and terror that Hamas creates with terrorist operations during the day and the attacks during the night,” it said. “We are prepared for a variety of scenarios and are determined to continue to carry out its mission to protect Israeli citizens.”

The IDF also confirmed that of the 20 targets hit, one was a Hamas terror tunnel in southern Gaza as well as several production sites of aerial weapons and rockets.

Both Gaza factions vehemently denied responsibility saying in a joint statement that “it welcomed the efforts of the Egyptians to achieve the demands of our people and oppose all attempts to sabotage these efforts including launching rockets into Israel.”

It added that “quiet would be met with quiet.”

Palestinian media affiliated with Islamic Jihad also said that the Egyptian Intelligence Delegation in Gaza has been holding talks with leaders of the Gaza factions on Wednesday morning to ensure quiet and prevent further rocket fire.

Following the attack, Eshkol Regional Council head Gadi Yarkoni told Ynet, “We expect the cabinet and the army not to change their agenda and to adopt a policy of firm response to the ongoing terror attacks on the communities surrounding the Gaza Strip.

“For over half a year, explosive devices are thrown into our territory and burning by means of balloons, tires burn and suffocate the residents, and every now and then there is a random shooting, and we demand that the cabinet act decisively in any way that will put an end to this reality,” he said.

At a Wednesday security cabinet meeting with Prime Minister Benjamin Netanyahu, the prime minister warned that Hamas would pay a heavy price. Also in attendance were Defense Minister Avigdor Liberman, Deputy Chief of Staff Maj.-Gen. Aviv Kochavi, Meir Ben Shabbat, the head of the National Security Council; Nadav Argaman, the head of Israeli Security Agency and other senior members of the security establishment.

“Israel sees with great severity the attacks on the fence, on the Gaza perimeter, on Beersheba —  everywhere. I said this week at the start of the Cabinet meeting that if these attacks do not stop we will stop them. I want to tell you today, Israel will act with great force,” Netanyahu said during the meeting at Gaza Division headquarters.

During his visit to the Gaza Division HQ, Netanyahu met with video surveillance operators who identified the launching squad that was thwarted by the IDF this morning and praised them for their work. He later also met with local council heads from the Gaza Belt region.

Meanwhile, Regional Cooperation Minister and Security Cabinet member Tzachi Hanegbi told told Kan Radio that Israel has nothing to gain “from a confrontation” in Gaza.

“The Joint Operation Room of the Palestinian Resistance Factions lauds the efforts exerted by Egypt to serve the Palestinians achieve their legitimate demands, and we reject any other attempt to undermine the Egyptian endeavors, including the launch of rockets that took place last night,” the statement read.

Hanegbi said Israel recognized “the evidence supporting the reliability of this message,” adding that Israel has “nothing to gain from a confrontation because we will return to this point.”

Hanegbi said that most of the cabinet does not support engaging in a war in Gaza, adding that if Israel was to launch a full-scale campaign it would happen as “a matter of choice.”

With Hamas organizing weekly violent protests on the Gaza border, Hanegbi warned that “the prime minister has defined the parameters and this coming Friday will be a test of Hamas provocations.”

The Security Cabinet was scheduled to meet at 7 p.m. on Wednesday once Chief of Staff Gadi Eisenkot had returned from the US.

Ilanit Chernick and Mara Vigevani contributed to this report.